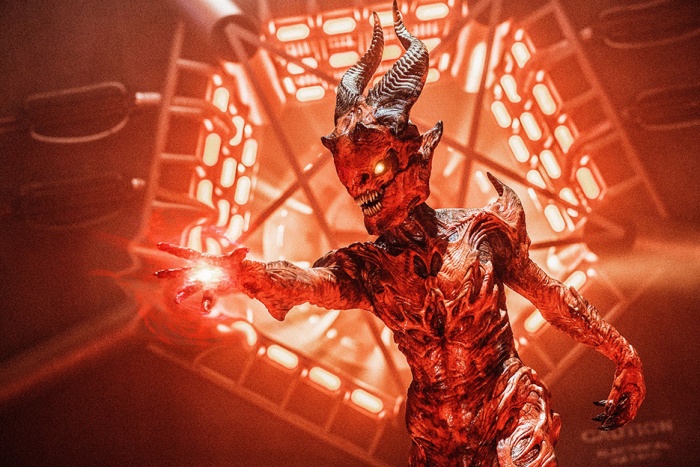 Nekrotronic will celebrate its Australian premiere when it opens the SciFi Film Festival in September.

Picking up after a millennium of badass battles between demons and a secret order of demon hunters, known as Nekromancers, the forces of evil have found a way to possess souls through social-media apps. With every Wi-Fi-connected soul on the planet at risk, a dwindling band of Nekromancers find themselves forced to put their faith in a hapless sanitation worker, Howie (Ben O’Toole). Howie unwittingly carries an ancestral power that may afford them the means to definitively force evil offline.

“My brother and I have wanted to make a crazy-fun, Aussie comic book movie like this since we were about 12 years old and now, we’ve finally done it!” said Kiah Roache-Tuner.

“I’m super-stoked that we’re going to premiere at the 2019 SciFi Film festival and that Australian audiences will get to see the movie the way it was supposed to be seen: big and loud on a giant fifty-foot screen!”

“To welcome the Roache-Turner brothers and their insanely entertaining film into the SciFi Film Festival universe is a humbling experience for us all here, given the international standing they have attained. It also reinforces our commitment to homegrown genre works and our support of the local sector’s supremely talented effects community.”

“Nekrotronic is going to amaze and astound audiences on opening night,” Foster said. “The Roache-Turner Brothers will be attending to front what promises to be a wild Q&A; we’ll be offering a glimpse inside the Nekrotronic universe via a Virtual Reality experience; and, expect visits from the demons that populate Kiah’s insanely entertaining second feature. It will be a festival screening event like never before.”

Fans will be able to own a copy of Nekrotronic shortly after, with the film releasing on Digital platforms, Blu-ray and DVD on Tuesday, 10 September, with a wealth of exclusive bonus content. Universal Sony Pictures Home Entertainment will be releasing Nekrotronic in Australia and New Zealand.

Filmed in Sydney, Nekrotronic is the latest sci-fi/horror spectacular by the Roache-Turner brothers, starring Ben O’Toole (Hacksaw Ridge, The Water Diviner), Monica Bellucci (The Matrix Reloaded, Mozart in the Jungle), Caroline Ford (Amazon’s Carnival Row, TV’s Once Upon a Time), Tess Haubrich (The Wolverine, Alien: Covenant), Epine Bob Savea, and David Wenham (The Lord of the Rings: The Two Towers and Return of the King, 300).