Damien Power on the set of Killing Ground.

“The worst violence is left off screen and left to the viewer’s imagination. I knew that audiences would be able to fill in those blanks in a worse way than I would ever want to show.”

Damien Power’s Killing Ground is brutal, violent and unforgiving. Here, Power talks us through the process of making one of the most shocking films to come out of Australia since Scare Campaign.

We’ve all read the synopsis for the film, but in your own words, can you tell us what the film is about?
I would say that it’s about Sam and Ian, a young couple who go camping in this very remote spot. When they get there they find a car and a tent but no signs of the campers. They decide to stay but they grow increasingly uneasy when the campers fail to turn up. The next day they find a very young child wandering in the bush which begins all of their troubles.

Killing Ground has had a very successful festival run over the last year. Describe the festival circuit for first-time filmmakers who are about the embark on a similar journey.
We had our world premiere at the Melbourne International Film Festival’s Night Moves last year which was great. With a film like this it’s always great to screen it to a midnight audience because you know if an audience turns up to see a movie at this time they’re genuinely excited to see it. I think those audiences know what they’re going to get.
We’ve screened it at a couple of festivals that weren’t genre festivals, or that didn’t have a genre sidebar, and you get more of a mixed crowd which can be interesting. There were a handful of smaller Australian festival which screened the film before our international premiere at Sundance which was beyond amazing.

I find at some of the smaller festivals audiences are more willing to share their opinions about the film. Did you have any interesting reactions to it?
We screened the film at Breath of Fresh Air Film Festival down at Launceston where I’m from. Aaron Glenane went along to that one and a woman approached him and told him that she used to be a homicide cop and that she had worked some of Australia’s most notorious cases. She said she felt that he and Aaron Pedersen perfectly captured what these guys are really like. I think it kind of freaked him out a little actually. [Laughs].

What a compliment.
It was. Festivals are great because you get that audience interaction. Most of our screenings at Sundance were midnight screenings and we had people lined up in the middle of the night during a blizzard. They’re very keen. This is a great film to see in a cinema with an audience because people get into it and they get quite vocal. For me the best part of the entire filmmaking process is getting to watch the film with an audience in the cinema.

Did any of the audience reactions surprise you at any particular point in the film?
That’s a good question. The best thing that I’ve learnt from watching the film with an audience is that people really seem to understand it. They seem to get what I was trying to do with it. We seem to have enjoyed a genre-literate audience at most of our screenings. We’ve all seen this story before about people going into the woods and bad things happening to them so I was trying to bring something new to that. Firstly, I wanted realism. Not only is the material treated in a realistic way but the characters are also plausible. They make decisions that are realistic. As a writer I was thinking all the time about what I would do in this situation and that’s what audiences seem to come away from it with.
I also wanted to open the film with a non-linear structure because often these films are relentlessly linear.

I wonder how Tourism Australia react when they hear something like this is being released. What is it with you guys wanting to scare the shit of people who are thinking of heading into the bush or the outback?
[Laughs]. I don’t know. [Laughs]. I can’t see this playing on the in-bound Qantas flights that’s for sure.

It’s a story that could take place anywhere really, being a rural farmhouse, the dessert or a remote piece of coast line. What was it that made you want to set this story in the bush?
The whole idea for the film came to me as an image of an orange tent in the bush with nobody around. I don’t know where that image came from but it just popped into my head and I started thinking about what happened to the campers. Where are they? What’s the worst possible thing that could have happened to those campers? Someone has to find this tent and who are they? It all came about because of that image. From that point I drew on times when I’ve been camping in the middle of nowhere and you just feel so alone and isolated and miles from civilisation.

Did you camp much growing up?
As a kid I did a lot of camping. I was with my wife Rachel when I started writing this and by the time I stepped onto set for the first time I had two kids and we had became a family who goes camping. I have to say we only go camping to well-populated campsites though. [Laughs].

The violence in the film is quite confronting and brutal. Did you always want to push the limits when it came to the violence?
Yes. I wanted it to feel realistic. I wanted it to feel like real violence actually does. That meant that it was going to feel brutal, but it also meant that I was going to be relatively visually discrete in terms of what I showed. The worst violence is left off screen and left to the viewer’s imagination. I knew that audiences would be able to fill in those blanks in a worse way than I would ever want to show. Once I decided that I wanted it to be realistic it set a tone and I really wanted to be very careful about how much I show.

Why don’t we see a lot of violent horror films in Australian cinemas compared to other countries? Is it a funding issue?
Our principal investors were Screen Australia and Screen NSW so we wouldn’t have been able to make the film without them. But I think it is the case that most roads to financing a film leads to these agencies so it was important for me to convince them, or explain to them, that this wasn’t a piece of exploitation and that I was serious in my intent that the violence is there for a reason. For me, Killing Ground is a violent film, but it’s also a film about violence. One of the cruelties of violence is how it narrows your choice. As a victim of violence you can either fight, run or freeze. That’s pretty much it. You have nothing else to do. Those are all animal responses so it robs us of what makes us human which is choice. I tried to show that on a macro level but also through the whole story as we see Sam and Ian’s choices get progressively narrower as the film goes on.

It might be because I’m a huge Australian film buff but I feel like there were a few nods throughout the film to movies like Wake In Fright, Long Weekend, Razorback and Wolf Creek. Would I be right?
If you’re making a genre film I feel like your film is in this dialogue with those films from the past. In making the film I was definitely aware of how this film fitted into a tradition of Australian films. I’d also add The Boys into that list as well. We looked at some of those films in the lead up to making this and I was conscious of this film existing in this tradition of Australian cinema. 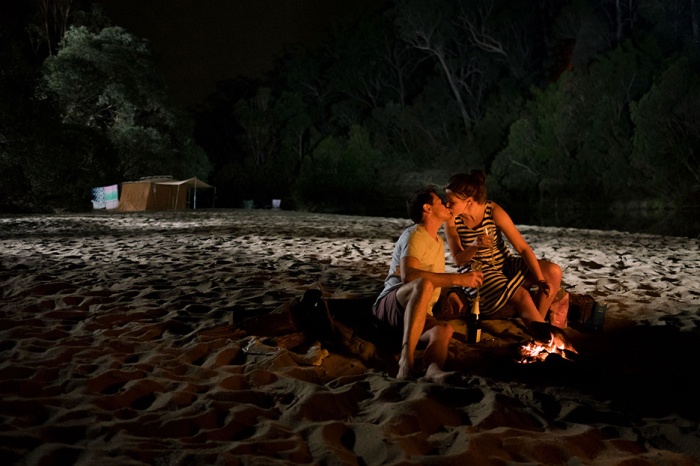 Where these the kind of films you watched growing up?
Yeah. I grew up in Launceston in Tasmania. It’s a small town with one cinema. As a teenager I joined the film society with my grandfather and we would be watching early Spike Lee, Jim Jarmusch and lots of the classics, but in terms of this genre of film, I remember being traumatised by the first Mad Max while watching it at my cousins house when I was way too young. That film has been seared into my brain ever since.

The entire cast is terrific but the one actor who really stood out and gave me a real chill is Aaron Glenane. Can you tell us about working with Aaron as an actor as well as his performance in this film?
I actually met him through an audition process and then I cast him in a short film I made a couple of months before Killing Ground called Hitchhiker. That’s a genre short which was my attempt to make the ultimate hitchhiking film in some way. It’s about a serial killer picking up an escaped prisoner. Aaron Glenane plays the prisoner and Julian Garner, who played Rob in Killing Ground, actually played the serial killer. I think it would be a very strange double bill if we ever made it into a feature because audiences would be expecting Julian’s Rob in Killing Ground to go psycho on Glenane’s character. [Laughs].
I think Aaron is fantastic. He steals the film and he gives such a great performance that I really hope people sit up and take notice of him.

They will.
It was always important for me for this character to be realistic and that he’s not a cartoonish villain. Both Aaron’s found the right amount of humanity behind those guys. That’s why we spend a little bit of time with them before we realise exactly who they are.

What’s next for you? Do you want to continue making these genres films?
The only advantage of taking so long to finance and get a film up and going is that I have the time to keep writing. There are three feature projects at different stages of development that I would say are in the thriller genre. One is an adaptation of my short film Peekaboo which you can find online. It’s an abduction film about a woman who loses her child in a shopping centre carpark and she thinks he’s been abducted. They’re all about my fears and anxieties as a parent. [Laughs].

Killing Ground is in cinemas from August 24.