STUDIOCANAL have released a new sixty-second trailer for the sequel to the global hit comedy, A Few Best Men, which will land in cinemas across Australia in 2017.

In A Few Less Men, the hilarious sequel to the worldwide hit A Few Best Men, a destination wedding in Australia’s Blue Mountains goes horribly wrong when Luke gets drunk and falls off a cliff. Our boys, David (Xavier Samuel), Tom (Kris Marshall) and Graham (Kevin Bishop) suddenly find themselves transporting their friend’s corpse back to London, where his grieving Aunt is planning the funeral. When their private jet crash-lands in the bush, the boys must carry the body across the treacherous landscape, resist some sexy ravers, dodge a machete-wielding mother and handle a mix up with a giant gold penis, all in a race against time to return Luke home. Will they all survive… intact?

In the short-and-sharp new trailer, fans of the first instalment and new audiences get a sneak peek at the raucous mishaps and sticky situations in which David, Tom and Graham find themselves in this laugh-out-loud romp across Australia. 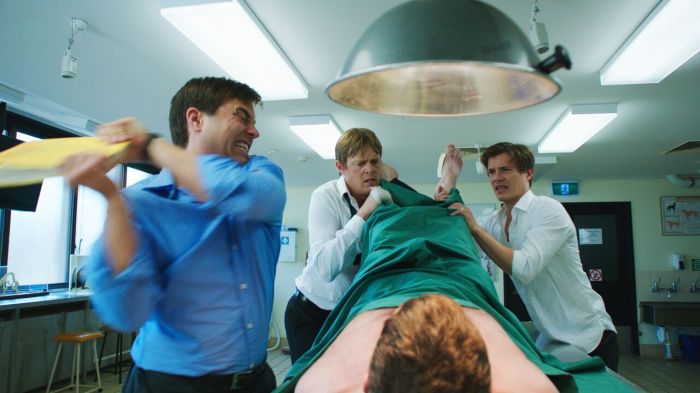 A Few Best Men producer Laurence Malkin says, “We’re excited by STUDIOCANAL’s plans for the film and its release across Australia. We appreciate their continual support of the film and the local industry. This is an exciting moment for us – the film has the right mix of mateship and big, bold humour that will leave a wide audience of movie-goers in stitches.”