Help us continue to cover Australian films by making a donation to Cinema Australia below.

A young Perth man’s story of survival and flight from war-torn Sudan to a new life in suburban Perth is winning acclaim and wide distribution at film festivals around the world.

A group of Western Australian filmmakers from migrant and refugee backgrounds have created the short film Two Sands, which is screening at Perth Festival’s Lotterywest Films from 6-12 December.

In the film, the lead character Garang (Garang John Deng) struggles on his first day at high school in Australia, triggering memories of being lost in South Sudan. As past and present collide, Garang must find a way to bridge the gap between where he is and where he’s come from.

Written by Kook Manuer and Poppy van Oorde-Grainger, Two Sands is based on an incredible true story from Kook’s childhood as well as the writers’ shared experience of being teenaged new arrivals in Perth.

Poppy van Oorde-Grainger is a filmmaker and artist based in Australia. She first gained national recognition as the winner of the Fremantle Print Award and then later the Australia Council Kirk Robson Award. Poppy’s projects have been broadcast on Nickelodeon, SBS and ABC and presented at international festivals and galleries including London International Festival of Theatre, Japan Media Arts Festival and Museum of Contemporary Art in Sydney. 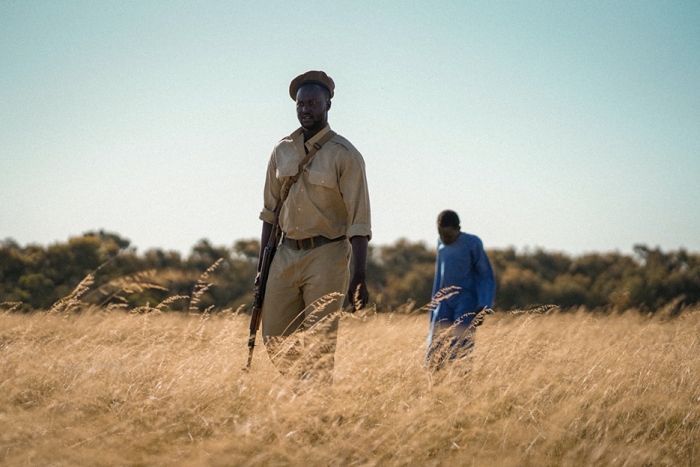 Kook Manuer is a writer and actor based in Australia. His most recent acting role was in Molly and Cara, a short drama broadcast on SBS. Kook also coaches a South Sudanese Australian youth soccer team to helping other young people through sport.

Two Sands recently won best film at Port Shorts in Queensland and has screened at numerous Academy Award qualifying festivals including St Kilda Film Festival in Melbourne and Cleveland International Film Festival in the US.

At the same time as the film is showing at Perth Festival, Two Sands is screening in the Ugandan capital of Kampala, where Kook spent several years as a child in a refugee camp before coming to Australia.

We grabbed a few minutes with Poppy van Oorde-Grainger to find out more about the film.

Tell us about the first time you met Kook.
We met in 2012 when Kook was a student at Aranmore Catholic College’s Intensive English Centre and I was working as an artist making animations with the students. I asked Kook if there were any stories he wanted to animate and that’s when he told me about the time he was lost in the wilderness in South Sudan. Three years later I was still thinking about Kook’s story. I was living in France and volunteering with refugees who were sleeping in the streets. I was surrounded by people who felt lost and I felt lost myself because I couldn’t speak French. It reminded me of how I’d felt as a 13 year old when I migrated from UK to Australia. This gave birth to the idea of weaving flashbacks of Kook’s story of being lost into a film about feeling lost in a new country. When I got back to Australia I asked Kook, now in his 20s, if he’d like to write that film together and he said yes. The first thing we did was look for parallels between when we first arrived in Australia and when Kook was lost in South Sudan. We’d read lines of narration from the South Sudan story like “when I looked up everyone was gone” and then we’d create a parallel scene in the Australia story, like being the worst in high school swimming lessons. Then we thought about how we wanted the story to end. In Kook’s animation he is rescued by his family and says “when we got back to the village, grandma was waiting for me.” Kook and I had recently been to a South Sudanese traditional wrestling match that David Kucha, one of our producers had helped organise. That cultural event felt like the perfect analogy for returning home to your village so that’s where we set the final scene of Two Sands.

The Sudan-set scenes are simple, but they’re very convincing and conveying. What was involved in selecting the locations to shoot these particular scenes?
[Laughs] Funny story! One of our co-producers Dan Thom did a brilliant job of searching for wild grass that looked like the references Kook showed us. After a long hunt he finally found Perry’s Paddock and it was perfect… until… the day before the shoot, someone mowed it! Luckily for us they left about 20 square metres unmown so our cinematographer Lewis Potts just had to get very creative with angles.

How involved were the local Sudanese community in the making of the film? Were there other consultants other than Kook?
David Kucha is South Sudanese and as one of the film’s producers he helped Kook and I make sure everything was culturally appropriate. For example, we asked a young man, Atem Dau to narrate the film because the age of his voice was close to the age Kook was when he first arrived. But the Dinka Bor dialect that Atem speaks is different to the Rumbek-based dialect of Dinka that Kook speaks, so David worked with us on the translation. David also helped us get permission from the South Sudanese Australia Traditional Wrestling Association and Western Empire to use footage from one of their matches in the film. When I asked Kook why he though the South Sudanese community had been supportive of the film he said, “The reason other South Sudanese community people want to be involved is they see this film as the beginning. This is the first time, it’s a footstep for us. There’s more stories than this and all the stories the community has, they want them to be heard.”

Two Sands has a successful festival run so far. Why do you think people are responding so well to the film?
Kook said, “the emotion of the kid who got lost in the bush and the journey itself touches people’s heart, and I reckon that’s why people are responding to it. It’s a true story as well, it’s not something that’s been made up, it’s based on a true story. When I showed it to my boss at work, he cried. I never talk to him about me, so I told him if he sees the film he will understand me. After he saw it, he said he never realised I came this far to be where I am.”

Two Sands has received eight nominations the WA Screen Culture Awards. What does being nominated mean to you?
The nominations are huge. Two Sands is the first screenplay Kook and I have written and it is our lead actor Garang John Deng’s first time acting, so to be nominated for outstanding achievements in writing and performance is very encouraging. We are all keen to keep making films so getting that kind of recognition is really helpful and we’re so grateful to Revelation Perth International Film Festival for organising the awards.

The WA Screen Culture Awards are on this Sunday, December 5. Details here. The film will screen at Perth Festival 6-12 December. Details here.