Occupation: Rainfall, the spectacular new Australian alien invasion blockbuster, produced entirely independently, will release in Australian cinemas on 28 January 2021. The film will open across more than 120 screens, reaching a wide audience of sci-fi adventure lovers and will be distributed by genre film specialists Monster Pictures.

Directed and written by Luke Sparke and produced by mother and daughter duo Carly and Carmel Imrie (Occupation, Red Billabong) and co-executive producer Todd Williams (The Nun, Alex and Me), Occupation: Rainfall is an action-packed, unstoppable thrill-ride that stretches from the scenic hills of the Blue Mountains to the battle-ravaged streets of Sydney. The film features eye-popping visual effects by local industry leaders including Creative Cupids, FIN and countless independent artists with backgrounds working on major studio pictures.

Luke Sparke‘s highly anticipated follow-up to the 2018 Occupation picks up two years into an intergalactic invasion of Earth where survivors in Sydney, Australia are fighting back in a desperate ground war. As casualties mount by the day, the resistance and their unexpected allies uncover a plot that could see the war come to a decisive end. With the alien invaders hell-bent on making Earth their new home, the race is on to save mankind. 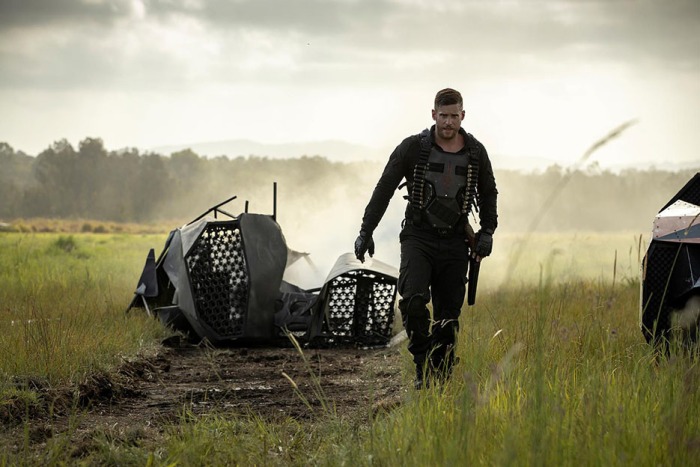 “I had lots of ideas for Occupation that I just couldn’t include on the available budget. With Occupation: Rainfall I said from the get-go I’m going to write what I think the film needs, no matter how ambitious it is and then we’ll sit down and figure out how to make it happen – and what I wrote was huge,” said Sparke. A sprawling film with so many action sequences, locations and set pieces. We announced it even before the first film was out, in a way telling the world that Australians can make big films like this. We have the capacity, the crews, the talent, to tell stories on a huge canvas and to get those big stories on screen.”

Occupation: Rainfall took more than three years to make and features over 1,500 special effects and a brilliant multicultural ensemble cast of Australian and international talent.

Occupation: Rainfall will release in cinemas nationally on 28th January 2021.