Victoria Wharfe McIntyre on the set of The Flood.

Set during WWII, The Flood is the story of Jarah’s coming-of-age in a brutal and lawless land – growing from a sweet child to a strong, independent and ferocious woman taking on Australia’s corrupt and bigoted system one bad guy at a time. In the best tradition of the gunslinging outlaw, when the enigmatic Jarah is pushed to the limit she explodes in a fury of retribution. But for a revenge western there is a surprising series of twists and turns that lead us closer to redemption and reconciliation.

You can find screening details for The Flood below, but before you see it, here are five things you need to know about The Flood.

1. The Flood is Victoria Wharfe McIntyre’s debut feature film as writer and director

Victoria’s short films have screened in over 200 festivals and won over 70 International awards including BAFTA and AACTA. Victoria’s debut short film as writer, The Telegram Man (directed by James Francis Khehtie) has played as part of the dawn service at ANZAC Cove Gallipoli for the last seven years including the 2016 special Centenary service. Regarded as a film of artistic, cultural and historical significance by the OSCARS Academy Awards Film Archive, The Telegram Man is part of its permanent collection at the Pickford Centre in Hollywood and the National Film and Sound Archive of Australia.
Victoria well understands the power of supported collaboration and has an established long term creative team anchored by the beautiful images of DOP Kevin Scott and remarkable scoring by Petra Salsjö; they are a multi award winning combination.
Their most recent short film Miro, made with producer Amadeo Marquez-Perez, written and directed by Victoria, is a WWII Australian First Nations Western. It premiered at the 2017 Melbourne International Film Festival and Victoria was invited to participate in the Accelerator Lab for directors transitioning to feature films. Miro was also nominated for Best Short Film in the 2017 AACTA awards and listed as one of the best short films of the decade. Acknowledged as a film of national significance Miro is held by the National Film and Sound Archive of Australia.
The Flood is an expansion of the themes and unique stylization of Victoria’s short form work.

Alexis Lane, Shaka Cook and Dean Kyrwood in The Flood.

2. Victoria Wharfe McIntyre says the story of The Flood acts as a parable for race relations in Australia

“The horrors and reality of colonisation in Australia have been actively expunged from our records since the time of invasion, resulting in a modern society in need of reconciliation, compassion, understanding and forgiveness. This is of course impossible without facing the truth of our past and in so doing finding a way to move forward together,” says Wharfe McIntyre.
“The Flood is an action packed dramatic western styled adventure that uses our nation’s history as a framework to support an uncompromising, exacting and at times romantic and delicate female driven story that acts as a parable for race relations in our country.
“It is a world of juxtapositions and grave injustice as we move through the lives of black, white and women of colour, young and old rich and poor, contrasting their grief, love, loss and rage against a ruthless rural patriarchy in WWII Australia.
We take a roller coaster ride, reimagining history, where women of the era radicalise and push back on expectations. Through living lives of their own choosing they highlight the choices and actions of the brutal society around them.
“As a filmmaker, I’m most interested in blending an artistic and stylized atheistic within a multilayered and meaningful action story. This is a very fine line to walk in a country with history such as ours – honouring the past and treating it with the utmost sensitivity yet creating a completely engaging world that is utterly entertaining – working closely with our First Nation creative partners and our highly skilled production design team, I am confident we have achieved this balance. Forgiveness and redemption are at the heart of The Flood but we only get there by traversing the truth.”

Shaka Cook and Aaron Jeffery in The Flood.

3. The Flood employed many consultants to ensure authenticity including:

Yuin Nation Creative Producer and On Set Cultural Consultant Paul McLeod Paul ‘Poppy Mac’ McLeod is a Yuin nation Elder and teacher. He has conducted ceremony, education and advised around the world and has delivered Australian Indigenous Astronomy classes at University of NSW. He performed ceremony on set of The Flood throughout the shoot and provided vital creative input behind and in front of the camera and through the development process.
Yuin Nation Creative Producer and On Set Cultural Consultant Justine Brown Mcleod Justine is a Yuin woman and traditional owner of the Wreck Bay Aboriginal community. She is on the executive of WBACC and on the Joint Board of management. She believes strongly in Culture and environmental interpretations of education in song, dance and lore. Justine is an advocate of empowerment for women, community and children. Justine and her brother Joe McLeod wrote four original songs in language for The Flood and has provided vital creative input both in front and behind the camera and through the development process.
Script Development with Guntawang Aboriginal Resources Inc A female Elders Artist Collective (Representing several Nations) lead by president, Yuin Elder Wendy Morgan, who also sits on the NSW advisory committee to the Minister for Ageing and Disability. Guntawang vice president Cathie Banton served as on set Guntawang representative throughout the entire shoot.
Script Consultant Andrew Craig Andrew Craig is a Kamilaroi man and NSW state manager of ARTS & SPORTS READY, a program that brings young First Nations people into the professional arts and sports arena. Andrew worked with Victoria on Miro, their AACTA nominated short film. 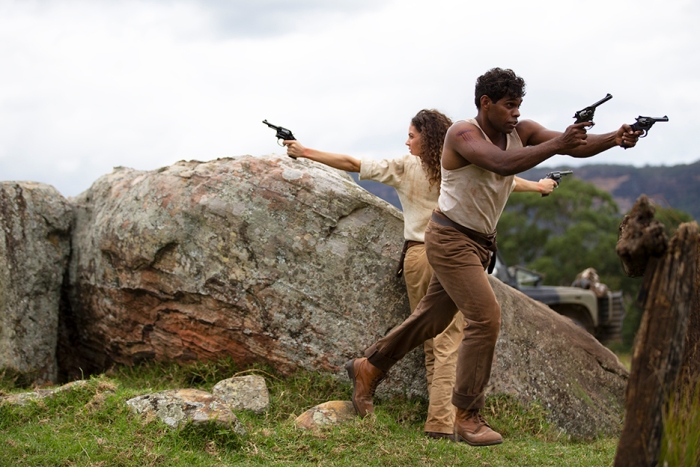 Alexis Lane and Shaka Cook in The Flood.

4. Lead actors Alexis Lane and Shaka Cook are two stars on the rise

Alexis Lane is a WAAPA graduate and has appeared in the critically acclaimed series Cleverman, Pulse for the ABC and Victoria Wharfe McIntyre’s short film Miro. A gifted dancer, Alexis has performed with Phil Walley-Stack and the Ochre Contemporary Dance Company. Alexis’ stage credits include Miss Havisham, Jane in Speaking in Tongues and Winyanboga Yurringa for Moogahlin Performing Arts. The Flood is her debut feature performance and a tour de force signalling a striking and powerful new talent.
Shaka Cook, an Innawonga man, hails from the Pilbara and is a graduate of WAAPA and NIDA. He has appeared in Operation Buffalo, Top End Wedding, The Leftovers, The Broken Shore, Black Comedy and was recently seen in Neil Armfield’s The Secret River remount for Sydney Theatre Company and its UK tour. Shaka is the only Australian First Nations man to be cast in the 2021 Australian iteration of international musical sensation Hamilton.

Eddie Baroo in The Flood.

“My first investment in a film was Crocodile Dundee. That did pretty well. I’ve waited a long time for another movie that stands out from the rest, and here it is,” says Pengilly. “The Flood sheds light on a sensitive underlying story that hasn’t been told, but needs to be told. Victoria Wharfe McIntyre has created an emotionally powerful and visually magnificent film that has all the elements of a global must see movie. Right from the early scripts, I knew I had to get involved.”

Alexis Lane in The Flood.

The following screenings of The Flood are confirmed, with others to be added in the coming days. Each screening will feature a Q&A with filmmakers and/or cast: