George MacKay in True History of the Kelly Gang.

Over the last few days I’ve been powering through Peter Carey’s multi-award winning book, True History of the Kelly Gang preparing myself for the Stan. Original movie which officially drops in January next year.

Justin Kurzel’s screen adaptation will enjoy a limited run in cinemas across Australia from January 9 via Transmission Films before dropping on Australia’s own streaming service Stan. this coming ‘Straya Day on January 26.

Here are 5 things you should know about True History of the Kelly Gang before you see it.

George MacKay in full armour in True History of the Kelly Gang.

1. In 2011 Hal Vogel, producer at Daybreak Pictures was in a meeting with author Peter Carey’s agent. Vogel, an admirer of Carey’s work, noted the True History of the Kelly Gang sitting on the agent’s desk. Having been previously optioned, the rights had reverted back to Carey. Describing the book as ‘extraordinary’ work, Vogel set about seeking finance. He had a few knockbacks but then came a screening of Justin Kurzel’s film Snowtown, at the London Film Festival in 2012 and that all changed. “I was blown away by the filmmaking,” Vogel says of Snowtown. “It’s an incredible piece of cinema. But there’s also a lot of resonances in the themes in Snowtown with Peter’s book and a sensibility that I thought would really be interesting in terms of discussing True History of the Kelly Gang with Justin.”
Kurzel already admired the book and he and Vogel met the next day for breakfast. Kurzel was initially reticent, needing a reason to make a ‘Ned Kelly’ film before he could commit to it. It was the unique point of view in Carey’s writing, plus the timing of the project and the distance Kurzel felt to Australia at the time that gave him the answer.

2. Justin Kurzel exploded onto the Australian film scene with his 2011 debut feature film, Snowtown. Snowtown earned Kurzel an AACTA award for best director. Two years later in 2013 Kurzel received an AACTA nomination for his The Turning episode, Boner McPharlin’s Moll. In 2015 Kurzel directed Michael Fassbender and Marion Cotilard in Macbeth and Fasbender again in 2016’s Assassins Creed. “It was a long gestation, about eight years,” Kurzel told Screen Daily when asked about the film’s genesis. “The project had gone through several incarnations with some pretty extraordinary directors before me, so I was aware of it. But it took making two more films before I picked the book up and read it again. Me and writer Shaun Grant, who did Snowtown, found an angle that we could embrace. It took a lot to get the finance together so in the end it became a massive passion project.” 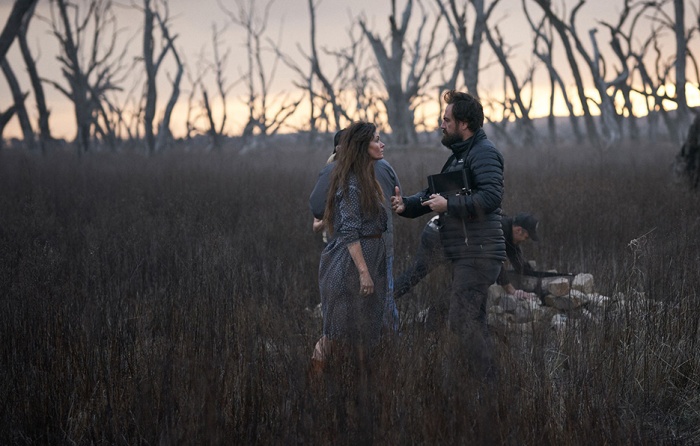 Essie Davis and Justin Kurzel on the set of True History of the Kelly Gang.

3. “Nothing you are about to see is true”. They’re the first words to appear in the trailer for True History of the Kelly Gang and diehard Ned Kelly devotees should take note. True History of the Kelly Gang is based on a book written by three-time Miles Franklin Award winning novelist, Peter Carey. In Carey’s novel, many aspects of the history of the Kelly Gang are invented, and many facts about Kelly are highly distorted. For example, in Carey’s book Ned’s ma Ellen and mentor Harry Power are lovers. The book is also written as though it’s a letter to Kelly’s daughter, but Kelly is not known to have had children. In Carey’s book, vulgarities are replaced with terms like “effing” or “adjectival”. We’re very keen to see if this aspect of the book has made it into the movie.

4. British stage, television and film actor George MacKay plays a beardless, frock-wearing Ned Kelly in True History of the Kelly Gang. MacKay grew up in London, England but his father was from Adelaide and had Irish heritage.
“There was instantly a feeling about George about wanting to be good,” says Kurzel of the first audition with MacKay. “Wanting to be a better man and wanting to potentially be great. Also in the book you could feel and understand that Ned Kelly was a writer, he wasn’t just some kind of ruffian and that there was something incredibly sophisticated about him. He had enormous potential, and there is a creative side to him that could have easily seen him as our Prime Minister as opposed to our most famous bushranger. It was also important to be able to transform that innocence to the eventual violent, brutal and unforgiving man.”
MacKay has starred in many films including Scott Hicks’ The Boys Are Back and Matt Ross’s Captain Fantastic with Viggo Mortensen. True History of the Kelly Gang is not MacKay’s only Oz film connection having starred in Australian director P.J. Hogan’s Peter Pan and Ophelia, directed by Sydney-born filmmaker Claire McCarthy. “I feel so honoured to do this, but not necessarily because of the guys who have done it before,” MacKay told The Sydney Morning Herald during an interview from the set of True History of the Kelly Gang. “I’m just trying to treat it as its own thing. Not a canon of Neds.”

Orlando Schwerdt and Essie Davis in True History of the Kelly Gang.

You can find a complete list of cinemas screening True History of the Kelly Gang below.

You can find out more about Stan. here.

Vote now for your favourite Australian film of the year!