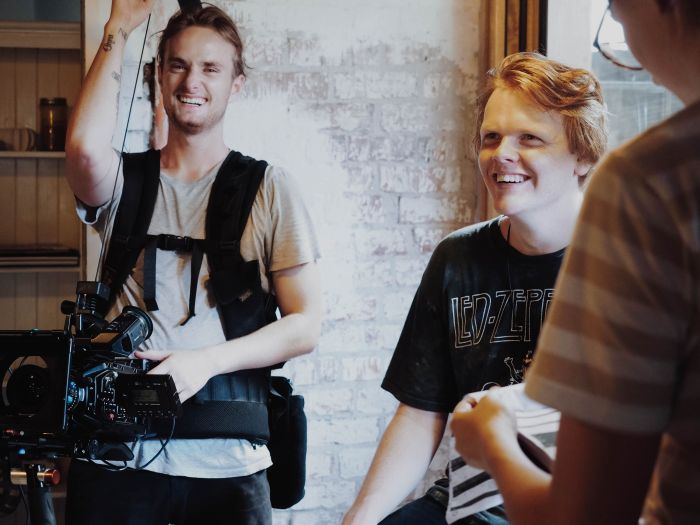 Bailey Watts and Peter Danks on the set of Wrong Turn.

“We wanted to illustrate the point that you don’t have to piss off to the bigger cities to create projects like this.”

Wrong Turn stemmed from an initial idea which I had a few years ago. It started off​ ​simply as a few sentences – just a rough synopsis – which drew on a few​ ​key elements that​ ​I wanted the film to touch on. I always keep a book beside my bed, full of my various inspirations and ideas. Each of these ideas I hope to one day turn into a film when the time is right.

I first got to know Peter Danks​,​ who co-wrote and directed this film alongside me, after working on his uni project a year prior to embarking on this short film​.​ We both found that we got such a kick from the experience of working together and were just itching to undertake another creative project.

We brainstormed several ideas that​ ​we both had before landing on the final concept for Wrong Turn​.​ This was simply the start of something that would eventually grow into something much bigger than we had ever anticipated.

With us both being young (19 and 20 at the time), this​ ​would be our first short ever. We had both worked on sets in the past to somewhat of a degree​, ​and knew the basic mechanics needed to construct a film. However, we were still venturing into uncharted territory — never before had we been at the forefront of such a project, controlling the whole process from start to finish.

After writing the film for several months, we slowly began to spark an interest within the local community and amongst our friends​.​ Before we knew it, we had backing from several companies and local personnel, as well as from a whole lot of people who were just eager and passionate to create something alongside us.

It was always a goal of ours to create an opportunity for the younger generation of filmmakers here in our hometown, Newcastle​. We wanted to illustrate the point that you don’t have to piss off to the bigger cities to create projects like this. Anyone can create a film in their own backyard with enough passion​,​ and nothing should ever stop you from doing this.

Overall, we spent around 19 months drawing together what is now Wrong Turn. With Peter studying full time at​ ​University and myself working full time within a local production company, we had to do this within our own time. From several months of spending late nights and early mornings delving into pre production and perfecting the script, to​ ​three days of shooting followed by a further few weeks of late nights and early weekends of post production, we finally​ ​pulled together what we feel is something incredible for our community, as well as for everyone who worked on set and those who were assisted us from the sidelines.

We want to take the time to thank everyone involved in this film. The assistance we received from those who believed in us and backed us is something truly special and without each and everyone involved we wouldn’t have been able to turn this dream into a reality.

This has been our first short film, but it certainly won’t be our last. We’re currently writing another film and can’t wait to embark on this experience and journey again.