This was the toughest Top 5 list to compile since we launched Cinema Australia in 2013, that’s how good Australia cinema has been in 2018.

Picking the number one film – also the Cinema Australia 2018 Best Film Award winner – was an even tougher challenge, but after much thought we’ve finally decided on a winner.

It’s worth noting that this list does not include documentaries. For what it’s worth we really, really enjoyed Oyster, Dylan River’s Finke: There and Back and Jill Bilcock: Dancing the Invisible. Check them out.

We’d love to know your thoughts on our Top 5 list, so if you have something to say then please feel free to say it. We have thick skin and we welcome everyone’s feedback.

What it’s about: Milena (Kate Cheel) travels to a remote opal mining community to see her estranged, ill father (Daniel P. Jones). Lost and alone, she falls into his bewildering world, where men escape society and share ideals of freedom. Soon, he doesn’t want her to leave. Stuck in time, father and daughter try to mend their fractured bond, but their connection is fragile, like the strange, colourful gems he digs up from the earth.

Why we loved it: If AACTA had a category similar to the Cannes Film Festival’s Caméra d’Or for best first feature film, Alena Lodkina’s stunning debut Strange Colours would have been a certain winner. Lodkina’s greatest achievement with Strange Colours was her capacity to convincingly (and seemingly effortlessly) transport viewers into the alien world of outback opal mining via a complex and captivating relationship drama. While Kate Cheel shines in the lead role, Justin Courtin and Daniel P. Jones give two of the best performances of the year – Courtin, a non-actor from Melbourne and Jones in just his second leading role following Amiel Courtin-Wilson’s Hail. Check out Lodkina’s documentary Lightning Ridge to see how well the two actors succeed in portraying their characters accurately.

What Alena Lodkina told Cinema Australia about her film: “It was inspired by the kinds of stories that I kept hearing when I was interviewing people [for Lightning Ridge]. They would tell stories about not seeing their families for a long time, or they would tell stories about other people who were on their own but they actually owned million dollar properties on the coast. There were all kinds of stories of estranged lives and characters. I thought that would be the perfect entry point into the community from this outsider who has a strong connection to the community without being a part of it directly.”

You can read the full interview here.

David Field as Roger in The Pretend One.

What it’s about: The Pretend One is set on a cotton farm run by Roger (Field) and his daughter Charlie (Hakewill). It’s a few kilometers out of town and a busy work-life means there’s not much time for socialising. From Charlie’s point of view, there’s a third person on the farm – her imaginary friend since childhood, Hugo (Whalley). Charlie and Hugo’s unbreakable bond is threatened when Charlie starts crushing on Guy, a reporter from the ABC who’s come to town to make a documentary on locals and their love lifes. When Hugo realises he’s in love with Charlie, he tests his boundaries and fights to become real himself.

Why we loved it: Who would have thought one of the most beautiful, heartfelt, emotional and complex on-screen relationships in Australian film history would be between an adult woman and her imaginary friend. Tony Prescott and his screenwriting companion James Raue haven’t delivered your typical romance. The Pretend One’s topical themes of mental illness are explored in ways seldom seen across all forms of media. This love story is deep, heartbreaking and slightly troubling, but there’s also a beautiful lightness to it. If Tony Prescott and co have taught us anything with The Pretend One, it’s that it’s ok to think outside the box when it comes to story. Be imaginative, be daring, be surreal. The Pretend One is a fantasy film and it’s a timely reminder that not everything we produce in Australian cinema needs to be based so firmly in reality.

You can read our full review of The Pretend One here.

What Tony Prescott told Cinema Australia about working with David Field: “I think David Field is a phenomenal actor. And I think he often plays this hard character, but seeing him show his other side and seeing him break and seeing him shift, I just loved exposing his range and seeing what he had in his arsenal. I think he brought so much to it just by breaking away from that really hard, strong character and showing his vulnerabilities.” 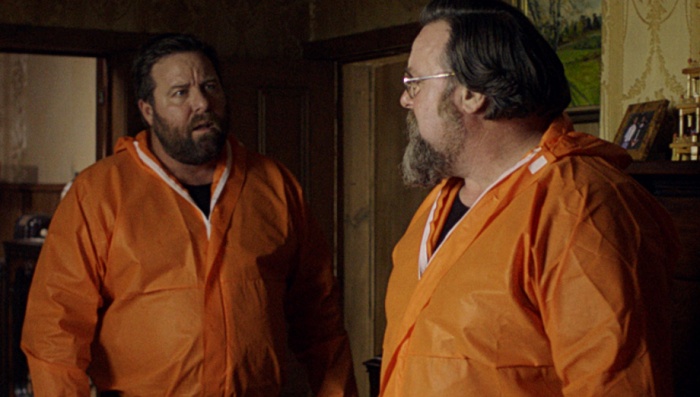 What it’s about: On a cold morning in the middle of country Victoria, two brothers arrive at the family home intent on murdering their step-father Roger. Terry and Jeff’s motive is simple, killing their step-dad will render their dying Mother’s plan to change her will in his favour, redundant.

Why we loved it: While the 2006 pisser Kenny will forever define Shane and Clayton Jacobson due to that film’s international success and broad appeal, Brothers’ Nest (originally titled Sibling Rivalry) will be the film which truly showcased the siblings’ impeccable filmmaking talents. Aimed squarely at a more mature audience, this disturbing thriller is an intelligent piece of filmmaking thanks to Jamie Brown’s black-as-charcoal script and Clayton’s dramatic whack as director. With five acting credits to his name in 2018 including Guardians of the Tomb, The BBQ, That’s Not My Dog and Bruce Beresford’s box-office darling Ladies in Black, Shane’s most affecting performance of his career can be found in this truly original piece of Australian storytelling.

Clayton Jacobson on why it took 11 years to make his next film: “It’s hard to get a film made. It’s hard yakka. And it hasn’t been from lack of trying. There hasn’t been a week since the release of Kenny that I haven’t worked on another film. Films take a long time to get made in this country. The average gestation period for a film to get made in Australia is eight to ten years. We’re only a year over that, so it’s not too bad. I’m hoping the next one doesn’t take as long. I’ve got a good ten movies in me but I’ve probably only got another couple of decades, so the maths don’t work out.” 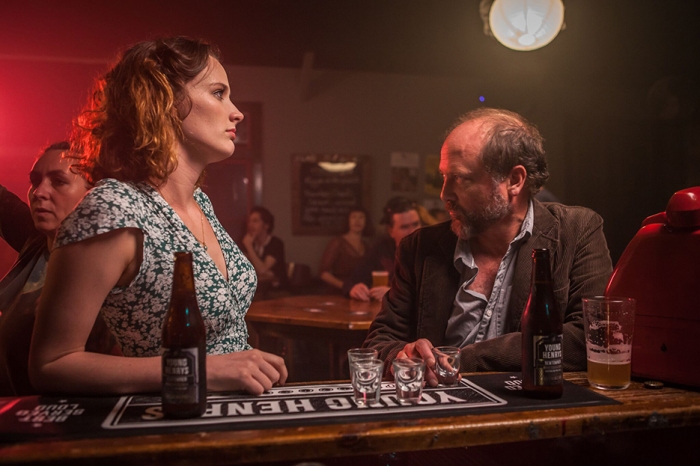 What it’s about: A self-professed “undiscovered literary genius,” Cutler has been waiting so long for his dream of becoming a published author to become a reality that his strength of mind is starting to crack. Not even the serial womanising and long boozy nights can suppress the discouraged high school English teacher’s artistic suffering anymore. When it looks like his novel is going to be published, he thinks his life has finally changed. But what promises to be the best week of his life professionally, spirals into seven days of hell personally.

Why we loved it: Book Week literally had us rolling around in fits of laughter from beginning to end thanks to Alan Dukes’ magnificent lead turn as the impassive and disheveled school teacher and wannabe author, Nic Cutler – or Mr. C to his mostly deviant students. The despicable central character we’re immediately forced to loath quickly becomes one we sympathise for once we realise how much of Mr. C is a reflection of ourselves – especially those working in a difficult-to-conquer creative industry. Davis’s ability to convince his audience to have compassion for such an unlikable character is a major achievement. While Davis is a brilliant, first-rate director, it’s the enthusiastic filmmaker’s fiery, razor-sharp and endlessly witty script which cements him as one of Australia’s finest screenwriters working in the industry today. We know he has Locusts coming out in 2019 (a supportive collaboration with first-time filmmaker Angus Watts), but our mouth is watering for Davis’s next solo project, whatever that may be.

What Alan Dukes told Cinema Australia about his first impression of Nic Cutler: “I must say, I didn’t really warm to him straight away. The challenge was for me to make this character in this story believable and human and have that redemptive quality. I needed to make something about his journey a progress in the right direction. I could see from the initial read that there was a journey to go on with this character and I never really knew if I succeeded with that until I heard some of the audience reactions and spoke to them after certain screenings. The challenge of convincing the audience to come along on Nic’s journey worked.”

What it’s about: Sweet Country is an epic Australian Western set on the Northern Territory frontier in the 1920s, where justice itself is put on trial when an aged Aboriginal farmhand shoots a white man in self-defence and goes on the run as a posse gathers to hunt him down.

Why we loved it: The local and international recognition received for Warwick Thornton’s harrowing and confronting epic speaks for itself. Guaranteed to top most 2018 end-of-year lists as early as its Venice Film Festival world premiere in September 2017, Thornton’s finest film to date is not only the best film of the year, but one of the best Australian films of all time. There’s one particular, incredibly cinematic scene in Sweet Country where Bryan Brown’s Fletcher admits his failure to capture Hamilton Morris’s Kelly to Anni Finsterer’s publican, Nell. Almost the entire background of the shot is filled with a scene from The Story of the Kelly Gang (1906). The scene is nothing short of jaw-dropping and a perfect example of Thornton’s flawless mastery of cinema. As a filmmaker, he’s truly unrivalled in this country. Some viewers may have found Sweet Country’s potent themes difficult to submit to over the film’s two hour duration, but if you found that to be the case then Thornton’s mission was very much accomplished.

Warwick Thornton on working with his son, and Sweet Country cinematographer, Dylan River: “He doesn’t take my name because he wants to make his own way in the world of cinema, even though I gave him a job. He’s an amazing child and I’ve obviously got a massive amount of nepotism because if you can’t give your children jobs then you’re not much of a father. Then again, I’d always make him work really, really hard then bludge all his money because Dad wants to go to the pub. When I agreed to make the movie you could see him snooping around to get a job on it – because he is a great cinematographer himself – and he’s probably thinking he’s operating B Camera or something. I said to him, “Ok, I want you to direct Second Unit, and DoP Second Unit as well as B Camera on the Main Unit.” You could see the blood drain from his face. He just completely shit himself. It was great because the best way to make movies is to get thrown in to the deep end. He saved my arse every single day.”