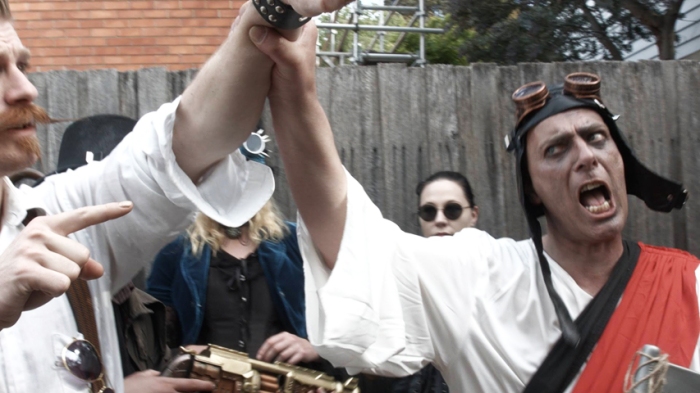 A post apocalyptic preacher has a difficult time explaining to a collection of steam punk survivors that technology is the source of all evil.

This film was a low budget guerrilla shoot.  During the last half of 2018, I was producing short movies at the rate of one every 2-3 weeks and the challenge was how to create another short film that would be interesting and different to the other shoots.  Usually, costumes, props and locations can be costly.  I approached the Melbourne steampunk community in the hope that some of their people would have amazing costumes and props that they might lend.  They did, but it was friends within that community that came through and saved me.  One friend, Melanie Kuhn, who is an extra in the movie, leant me enough costumes and props to deck out all the actors that you see in the movie.  Melanie is also an accomplished photographer whose work often features in exhibitions around Melbourne.

Writing the script was no challenge.  I’ve often read that you should script first and then find your resources, but I’ve found that if I get amazing resources first, then I just can’t help writing because it gets me excited and the imagination starts going.  The location was easy.  I just chose a lane.   With this sort of thing, there is always a risk that you will get people walking through your shoots, or capture things that are out of vibe.  We had both happen but one thing you can do is make sure that your film chugs along at a good pace so that people don’t notice a few things here and there that are out of place.

This was the third film that I’d done with Gerardo Chierchia and the second with Fabio Segatori.  Gerardo’s first work with me was to edit “CATch 22”.  Gerardo and Fabio’s first film together with me was a 2 minute short called “Dark Metamorphosis”.   They had proven themselves to be amazing, so now it was time to step up to something bigger.  Guerrilla shoots are for everyone.  Not every film maker can think on their feet and roll with unpredictable changes.  These guys thrive on it.  Since this shoot, we did one twice as big called “Parental Duties”, and on the shoot day, there was flash flooding which kept us from our chosen location where all the shots had been blocked out.  They still came through with spectacular results.

When it came to the actors, I’d worked with all of them before, so that made the job so much easier.  I tend to stick with those who I’ve worked with before as much as possible because you never know what can go wrong.  Knowing that your people are all willing to roll with the changes and to pitch in and help is handy.  Some, such as Glen Cook and Vixey Teh, have their Batchelor of Cinematography, so if needed, they can jump in as crew too.  This shoot went as smoothly as clockwork, so it’s one of the few that doesn’t have some crazy background story of battling the elements and having to do amazing things at last minute.