He’s one of Australia’s most gifted actors and in Romi Trower’s What If It Work? he gives one of the best performances of the year along with an equally impressive Anna Samson. Cinema Australia caught up with the very funny, very casual and very talented Luke Ford.

“I’ve always told myself that I don’t want to be a mediocre actor. I’m not wealthy and I don’t own a BMW. There’s still a struggle in me as an actor but I want to be able to look back on my filmography and say, ‘You know what? I did some really good work’.”

You were born in Canada. What age did you come out to Australia?
Quite early. I was born in Canada when my Dad was at university. We lived there for less than a year before we went to England and then moved out to Australia, because my mum is Australian. England was only a stopover to introduce the new baby to the relatives. I’ve lived in Australia ever since I was about one-and-a-half.

Anna Samson and Luke Ford in What If It Works?

Tell us about this character you play in What if It Works?
He’s an intriguing, out there, obsessive compulsive character that I think is quite lonely. He tries to venture out into the world a little bit once he meets Anna Samson’s character, or twelve characters, however many she plays. [Laughs]. He’s a guy who I think wears his heart on his sleeve but he’s someone who finds it very difficult to communicate according to society. He also battles incredibly with his OCD. His condition is intriguing because he can clean three hundred things three hundred times but he can live in a garage around mess. It’s all true though because while researching OCD you learn that there are different degrees. I had learnt a similar thing with Black Balloon that there are different degrees of autism. Romi’s brother who has OCD – a lovely guy – walked out, blew his nose on a tissue then dropped it on the floor and then the next minute he was using his pinky finger to open the fridge. I became intrigued and I was curious to learn more. OCD is not all about cleanliness.

So you met Romi’s brother and you spent a bit of time with him. How much of this character is based on Romi’s brother and how much of it is your own?
A large majority of the character I developed. Romi gave me a lot of guidance when it came to how extreme the character was. A lot of the writing was showing a real extreme version of this condition so I began to develop the physicality of my character with an understanding of that. I certainly didn’t go method and live with it like someone like Daniel Day Lewis would, but felt a lot of freedom to play with this character and to perform the character the way I wanted but with respect to Romi and her brother. The detail she gave to her script was a great guide to how she wanted the character played.

It’s a physical role, especially with your arms and hands. How did you develop this physical aspect of your character?
It was all experimental. I was experimenting in real life that I didn’t like being touched by doors so I wouldn’t keep my arms by my side. I’d have them in the air. Romi would be there encouraging me and telling me that what I was doing wasn’t over-the-top and that it was right. Acting is repetitive. It’s the action of doing. I would just be playing this out as much as I could and trying it out in my own house in my day-to-day life. Not as the character but as myself. I have to practice these kinds of things because I believe it makes me a better actor. I’d practice and practice and when I turned up on set I felt more comfortable that I’d be able to do justice to this performance.

It’s captivating to see you with your hands in the air for the entire film and still be able to pull off such an incredible performance.
Well I’ve always told myself that I don’t want to be a mediocre actor. I’m not wealthy and I don’t own a BMW. There’s still a struggle in me as an actor but I want to be able to look back on my filmography and say, “You know what? I did some really good work.” I used to love and respect Anthony Hopkins who was this psychopathic human-eating cannibal in one film and in the next film he was a butler in The Remains of the Day. The extraordinary difference in the characters he plays fascinated me when I was young studying acting. 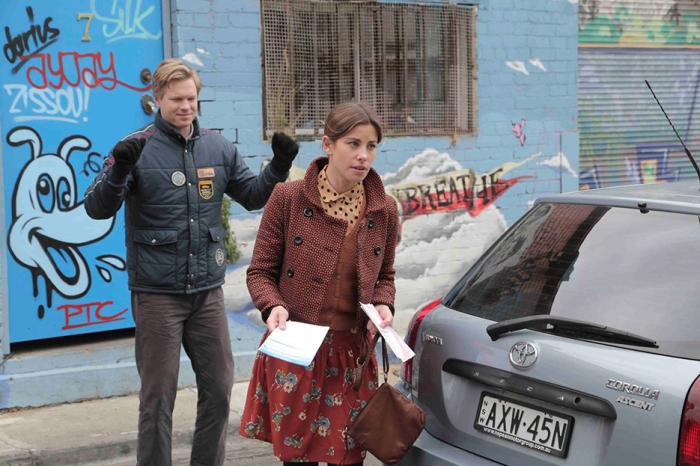 Luke Ford and Brooke Satchwell in What If It Works?

You spoke about Daniel Day Lewis earlier and him being a method actor. You’re an ambassador for the Sanford Meisner Technique of acting. Can you tell us about that and how it’s different from method acting.
This whole method acting thing is overrated nowadays. Every actor has studied method in some form or another. The Group Theatre was established by three great pinnacle teachers. Strasberg created the method, Stella Adler created the Stella Adler Technique and Meisner created the Meisner Technique. They all had the same foundation of method but Sanford’s technique has a lot to do with moment-to-moment acting. It’s literally taking on the other person’s behaviour, always trying to do something in the scene, accepting the character is a part of you and you’ve got to find you in the character. Sanford had this difference to the method where you would accept the imaginary circumstance with an element of truth rather than recalling something deep and dark which happened in your past to evoke emotion. Sanford taught that you could use an imaginary circumstance, evoke emotion from it, perform, and then walk away from the scene easier than you would if you were using something that happened in real life. That’s the difference. But the truth of the matter is, they all work. If they all work and you’re mentally healthy enough to be able to handle it all then there’s no right or wrong. As actors, you have to respect each other’s process.

You teach this technique too, right?
I’ve been teaching this ever since I was a kid. I’m not a Jedi of the technique because I never actually studied with Sanford. He died in 1991 when I was twelve. I’ve taught it all my life at different schools and I really enjoy watching students grow. I think it’s the best acting technique in the world and I don’t think there would be many people who would argue this with me. If you’re a beginner actor, go and study Sanford. It teaches you the five core foundations of what it takes to be a good actor and then go and advance your training after that.

This is the first feature film for Romi. What was it like working with her?
One of my favourite things about this industry is the support for first-time directors and I’m always keen to work with someone just starting out. Romi went through physical hell making this movie. Not just putting up with me. [Laughs]. But putting up with severe back pain for about two thirds of the film.
We had to take a break for a short period so Romi could sort her health out. They told her she would be out for four to six weeks and we were back filming a week and a half later. She is a machine.
I’m not difficult but I can be hard to work with because it’s a process and we’re all trying to get to the same place, but she was an absolute standout in achieving her goal. It was one of the biggest standouts of achieving a goal I’ve ever seen. She’s amazing. An incredible director.

Luke Ford and Isabel Lucas in The Osiris Child: Science Fiction Volume One.

This is the second film you have out this year along with The Osiris Child: Science Fiction Volume One. Shane Abbess is on another level with the films he’s making in this country. Can you tell us about working with Shane.
Shane is an absolute genius, Matt. I’m telling you. He’s probably going to be the next big Australian director. He’s on the cusp. He has this ability to make small budgets big and big budgets huge. He has this beautiful visual eye. I think he has real potential outside of scifi too and I’d love to see him venture into that a little more. I think you will see he and I work on several more movies. We have music playing at 5am in the morning and boom boxes blaring. Being on an Abbess set is unlike anything I’ve been on. He has a totally unique way of making movies behind the scenes. He lets you live on set and he lets you venture outside the box and take your performance wherever you want to take it. He has the ability to turn a great actor into an incredible actor. He’s amazing to watch.

What If It Works? Is screening at this year’s CinefestOZ which runs from August 23 – 27. Details here.
The Osiris Child: Science Fiction Volume One is out on DVD and Blu-ray from August 23.