It’s David Lynch meets The Stepford Wives in this dark allegorical comedy about a woman with a misshapen head, and the under-lurkings of a town secret buried deep.
Placidyl (Or The Dairy of a Madwoman) asks the big questions; What is it to be an outcast with a triangle-shaped cranium? How can society be as equally appearance-based as it is blind? What is really contained in one’s glass of milk? This ambitious experimental film was shot in under 20 hours and is Izzy Stevens’ directorial debut.

Placidyl was an ambitious film from the start. I was restricted to only two days inside the studio to film, and yes, that included the build. Within 13 hours of getting in there, myself and a small team of mighty humans built the entire set from scratch: mounting, painting, dressing, moving impossibly large flats. I seemed to garner some kind of super human lady strength where I was suddenly able to lift and move enormous, lofty flats five times the size of me. I didn’t notice when I threw my back out, nor did I feel the effects of a severe lack of sleep until the shoot was over. I was determined to make this weird film. The next day, we shot the film in 15 hours and completed a total of 40 shots, we became a machine. My crew seemed to know what I was going to say before it flew out of my mouth. 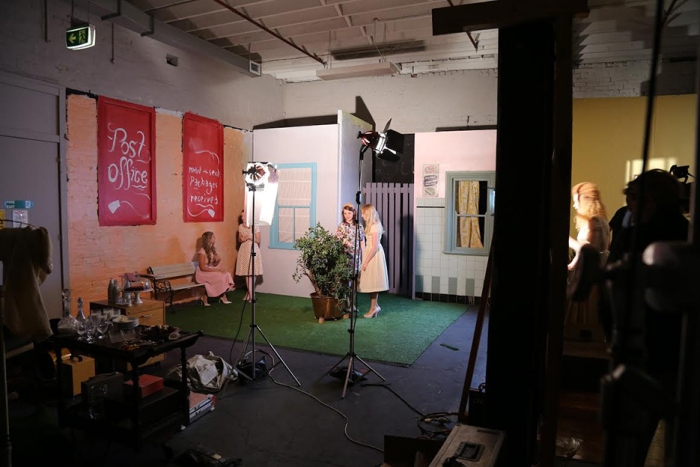 I must say, there would’ve been be so much more I could and would have done if I had more time, but the magic came from the restrictions, and my brilliant cast and crew, and man did I learn a whole lot from making this bad boy. Seven hours in to shooting, when the cast and crew looked about to drop dead, we broke for lunch. At which point a small group and I recreated Jane’s house to be Marcy’s, meaning we repainted and redressed the entire interior set. We only had so much space and we had to be wise with it. So all of Marcy’s interior shots were filmed whilst the paint was still wet.

I don’t want to talk too much about the meaning of this film, it is multi-layered, an allegory, and is filled with dark whimsy and coded messages. It’s better when you walk away without knowing what my true intentions were – because how did it make you feel? That’s the thing. However I will say this: In my opinion, Jane Triangle is in all of us. She’s the misshapen part of us, the nervous and incontinent child that hides, that we suppress; she’s the kindness, she’s the terror within us all. Marcy, well she’s the antithesis of those things: the confidence, the leader, the matriarch, the alpha female, the controller. How can we be so at odds with the opposing parts of ourselves?

I am deeply influenced by David Lynch’s style of storytelling and find myself constantly drawing inspiration from his work. For this film I was also creatively stimulated by: Lars Von Triers Dogville, Ron Howard’s The Grinch, as well as a bit of The Stepford Wives, for good measure.

Lucky last, I’d like to add that my lead actor Meg Ham playing both Jane Triangle and Marcy absolutely blew my mind. I am an actor by trade, and originally intended to play the roles myself (classic actor), however in the early stages of development I brought Meg in for a screen test and to play with the material, and what she brought to the table was better than I ever imagined. I am repeatedly impressed by the her strong, contrasting performances.

I hope you enjoy!