Written and Directed by: Cameron and Colin Cairnes
Produced by: Julie Ryan
Starring: Meegan Warner, Ian Meadows, Olivia DeJonge, Josh Quong Tart, Patrick Harvey, Cassandra Magrath, Steve Mouzakis, John Brumpton, Jason Geary, Sigrid Thornton, Kaiting Yap
Synopsis: Popular prank TV show, Scare Campaign, has been entertaining audiences for the last five years with its mix of old school scares and hidden camera fun. But as we enter a new age of online TV the producers find themselves up against a new hard edged web series which makes their show look decidedly quaint. It’s time to up the ante, but will the team go too far this time, and are they about to prank the wrong guy?
MA15+ | Facebook | Twitter

There’s a disturbing new web series raking in millions online so Vicki demands her creative team up the ante and take their series – think Shannon Dougherty’s Scare Tactics but with more blood – to the next level or face the axe.

From the very beginning of Colin and Cameron Cairnes’ (100 Bloody Acres) brilliant new Australian horror film there are so many unexpected and clever twists and turns that it’s difficult to discuss Scare Campaign’s narrative without giving anything away. Viewers will be glued to their seats though, sweaty-palmed with hearts racing. Nothing is as it seems – we’re all ‘stooges’ here.

Scare Campaign is the best thing to happen to the Australian slasher genre since the first Wolf Creek. It’s clever and witty script outsmarts anything that’s come before it. Viewers will struggle to catch their breath thanks to the film’s incredible pace which never slows down. It constantly delivers genuine frights and hardcore graphic violence, including slit throats and exposed brains – the squeamish better come prepared. 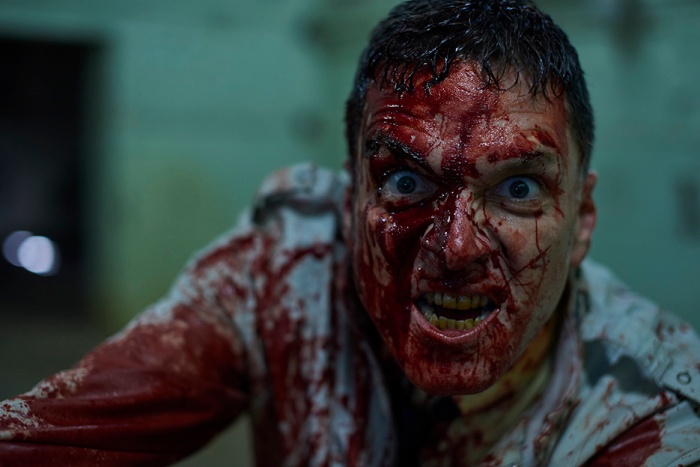 If you’re a film fan but horror isn’t your thing, there’s still a lot to be appreciated. The costumes and makeup are all world class and most of the performances are top-notch with only a few minor letdowns. Josh Quong Tart’s performance is a particular standout and one that will be talked about for years to come for more reasons than one.

So many Australian films have been released over the last two years that succeed on a technical level but fail to leave audiences satisfied and entertained, especially when they’re expected to hand over their hard-earned cash to see it. To put it bluntly, Scare Campaign succeeds on all levels and other Australian filmmakers must take note.

Perhaps the scariest thing about Scare Campaign is that it’s not hard to imagine an imitator becoming a reality in the not-too-distant future. After all, we do live in a time where a five second video of a dog twerking can out-rate an entire season of a hit television series by millions in less than an hour of being posted online. Now that’s frightening.