In making RED I wanted to explore volatility and rage in youth and specifically girls. I think how girls deal with anger is really interesting because on a societal level girls are taught to repress anger.

I was influenced by Gus Van Sant’s film Elephant and I wanted to create that same sense of continuous movement in the blocking, that circular feel to the movement, and that sense of passing the baton from one character to another. I also used Catherine Harwick’s Thirteen as a reference throughout production. I loved the repetition used in Harmony Korine’s Spring Breakers and I wanted to use that device more in RED but nobody likes an indulgent short film so we had to pull it back. Essentially the film is about how a person can feel so alone and in pain, and the person standing right next to them can feel the exact same way. 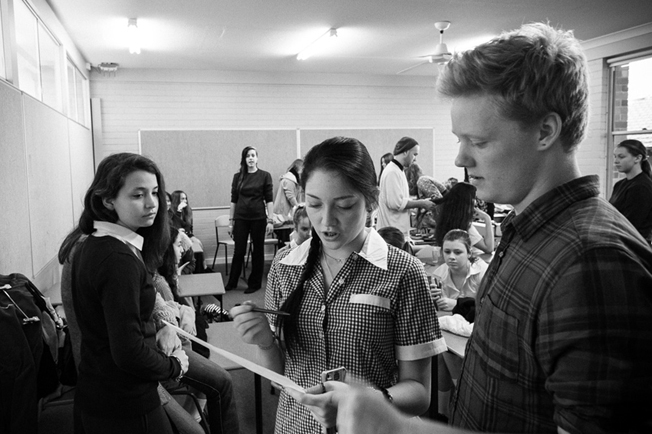 Casting RED was a lot of fun. Greg Apps was the casting director and we held an open audition and were lucky enough to find the four wonderful leads we have in the film.

Rehearsals were pretty much just about the four actors getting to know each and bonding as friends. Our production designer Sally Addinsall leant me her Polaroid camera and the cast and I spent most of the rehearsal taking photos. One of which you can see as the opening title and the rest went into Rose’s locker. Even though the film was scripted I think the cast did such a great job of making the dialogue feel completely like their own words. Hopefully audiences agree. My most used sentence on set was “lets add a swear word somewhere in that line.”

The shoot was two days and we used two different schools – one for the interior location and the other for all the exteriors. When we scheduled the shoot, producer Chloe Lawrence-Hartcher and I discussed the possibility of bad weather on the second day, which was our exterior day, but we realised there was nothing we could do because we only had those two days to shoot over and interior shoot day could not be moved. So we just crossed our fingers and hoped for the best, but of course it rained on our exterior day. We ended up waiting undercover and rushing out to shoot whenever there was a break in the rain. We had all these extras that we had to send home. I restaged one of the scenes and cut another scene out. Everyone was great though. Visually it’s much better than if it was a bright sunny day.

My next project is a supernatural webseries called Jade of Death. It’s very different to RED but I’m really excited about it. I feel like it’s a chance to pull together everything I’ve learnt in making my short films.

You can stay up to date with Jade of Death via the film’s Facebook page here, or Twitter page here.

One thought on “Sunday Shorts: RED – Watch it here”