Ma and Moore were presented with the film prize tonight as part of CinéfestOZ’s Gala Night celebrations in Busselton, in the south west of Western Australia.

Starring Tom Lawford and Sylvestor Rangie and set against the backdrop of Australia’s tangled colonial and Indigenous history, documentary Putuparri and the Rainmakers – a MIFF@ CinéfestOZ film – explores one man’s struggle to fulfill his destiny.

The film beat fellow finalists Now Add Honey, Backtrack, Pawno and The Daughter to the title.

On accepting the Film Prize – Moore said: “Thanks to CinéfestOZ and its sponsors for running such a fabulous festival. It’s an honour for a small film like ours to win against such heavy weight competition. It’s a great boost for the people of Fitzroy Crossing who appear in the film and I hope it will encourage all Australians to value and better understand the culture of our first peoples.”

The prize is awarded each year to an Australian feature film or feature-length documentary.  In 2014 it was awarded to Paper Planes, which went on to critical and box office success.

“It is a great coup for WA to be home of Australia’s biggest film prize and we hope it will help the event grow to become one of the most prominent film festivals in Australia and, at the same time, promote the State and the South West region to the world,” Dr Hames said.

CinéfestOZ is supported by the State Government through Tourism WA’s Regional Events Program, which is funded by Royalties for Regions. Rio Tinto is also a proud Premium Partner.

Regional Development Minister Terry Redman said the investment by Royalties for Regions had helped to increase the number, calibre and diversity of events across the State.

“Tourism is critical to the regional economy and I am pleased to see that this investment is helping to position regional Western Australia as a recognised events destination,” Mr Redman said. 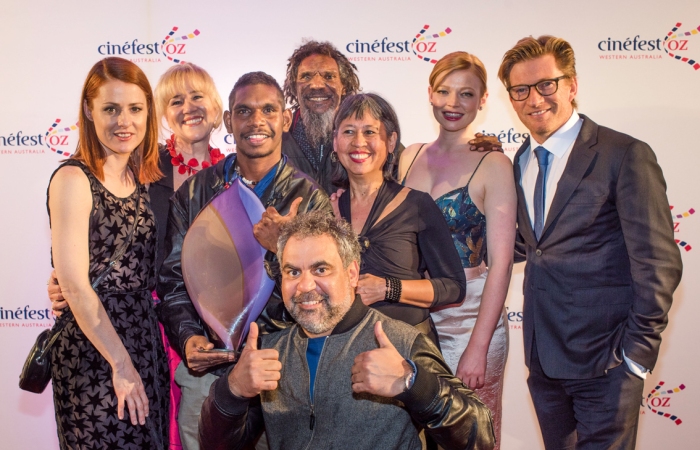 “Events not only add vibrancy to towns, they enrich the local community, boost their economies and make them exciting places to visit and to live.”

CinéfestOZ received more than 30 submissions for the prize, with the winner decided by a jury of five esteemed members of the film industry.  Jury Chair, Australian actor David Wenham, was joined by Sarah Snook, Wayne Blair, Liz Kearney and Annie Murtagh-Monks.

The jury watched each of the finalists with an audience at CinéfestOZ before coming together to deliberate and vote on the winner.

Wenham said he and his colleagues on the jury were enormously impressed by the quality and calibre of the Film Prize finalists, all five of them being extremely strong contenders for the prize.

“Putuparri and the Rainmakers had a story and characters that were so compelling and emotionally engaging,” said Wenham. “This story was told in such a way that it reinforced the power of cinema to entertain, touch us deeply and stay with us forever.”

“CinéfestOZ is committed to supporting the Australian film industry by creating opportunities for filmmakers and recognising the incredible talent we have here,” Shervington said.

“The Film Prize attracts a magnificent collection of quality films and brings the absolute best in Australian cinema to CinéfestOZ.

“The high standard of all the Film Prize finalists is testament to the enduring, diverse and consistently innovative nature of Australian film.”

Culture and the Arts Minister John Day said ScreenWest supported the festival to ensure opportunities were available to showcase the State’s screen industry.

“CinéfestOZ has grown from a small festival to being internationally regarded, attracting key talent and the screen industry to the South West of the State,” Mr Day said. “It provides a great opportunity for industry and stakeholders to come together.”