Christopher Sun’s sick and twisted imagination and incredible passion for his craft is what makes him a favourite in the Cinema Australia office and we couldn’t be more excited for his upcoming film, BOAR. We grabbed five minutes with the busy director to discuss his upcoming creature feature.

People are obviously going to draw comparisons between BOAR and Russell Mulcahy’s 1984 classic, Razorback. Should audience be expecting something completely original or will there be some similarities?
BOAR is completely different in every way. Razorback is one of my favorite movies of all time however BOAR is not even remotely the same. It has a completely different storyline and more kills. What people need to remember is I am not trying to compete with Razorback – to be honest I wouldn’t dare because that movie is fucking insanely cool. I just want to make a creature feature and a shark or croc film is a lot more expensive to shoot.
People also seem to forget Razorback is not the only killer pig movie ever made, but I guess being Aussie and Razorback being Aussie they will want to compare the two. Hopefully when they watch Boar they will love it just as much as we have all loved and will continue to love Razorback.

What’s the Boar’s story? How big is it and what kind of carnage can we expect from it?
BOAR is the story of a family – stepfather Bruce, mum Debbie and Debbie’s two kids Ella and Bart. Ella’s boyfriend Robert also travels with them to Mitchell to visit their roo shooting uncle Bernie. The kids talk Bernie into taking them all on an outback adventure to spot roo’s and pigs when all hell breaks loose and they become hunted by a 4m long, 8ft tall killing machine.
Most people are expecting me to shoot as much gore as I can and to be honest I will, But the theatrical version will be MA15. DVD and VOD will also be MA15 but we will release a full-uncut Directors R-Rated version also.

From the photos we’ve seen, the boar looks pretty fucked up. Is it a zombie?
[Laughs]. I wish he was but no. Boar has a damaged right side as this is his chosen ramming side, it never really gets time to heal as he roams the Aussie out back smashing into everything he can. He will definitely look evil as fuck on screen that’s for sure.

You obviously love creating these kind of creatures. How long did it take to finalise the design of the Boar?
Steve Boyle and his crew built the Marquette for Boar using designs from myself and concept artist Rob Stanley, however Steve came up with some cool idea’s of his own whilst building it. It took a couple of months to build the Marquette but was well worth it, as now the full size pig is well underway we can make changes that we didn’t like with the miniature. 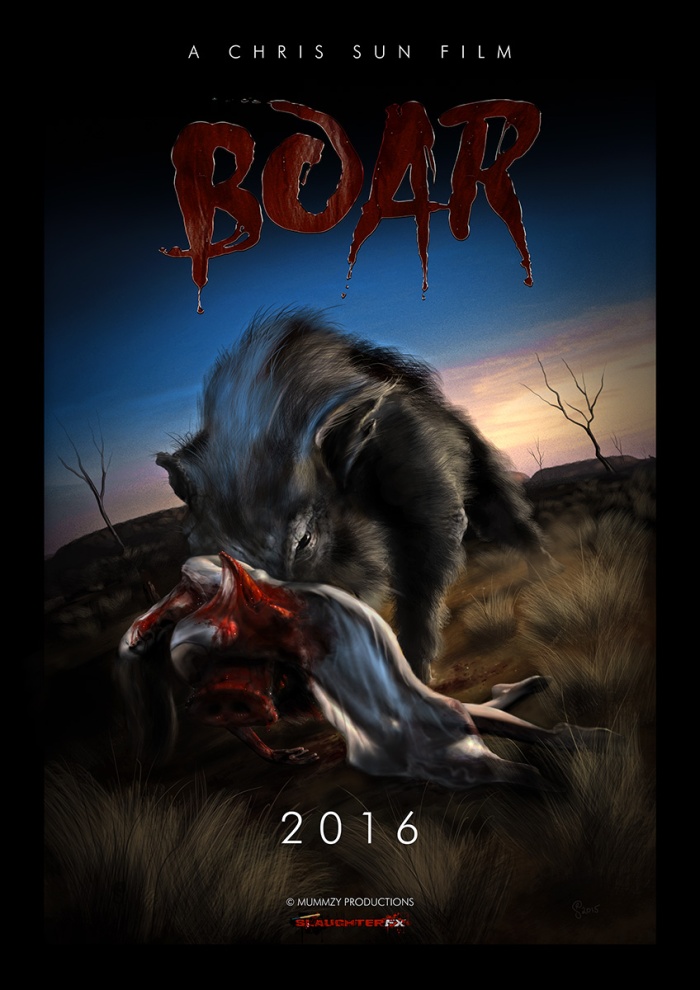 You must have a great relationship with the cast of Charlie’s Farm because they all speak very highly of you and Tara Reid said she’s dying to work with you again. Can we expect to see another team up with Nathan Jones, Allira Jacques or even Tara for Boar?
Allira Jaques is AMAZING and now living in the USA. We have done three films together but I think she is now living the dream over there – keep your eyes open for her as she will smash it in the US. Tara is also awesome and I guess you never know what the future holds. Nathan Jones is in talks with me for BOAR so will be good to work with Nathan again; he is not only a brilliant actor but also one of the nicest people I have ever met.
We are also in talks with legends like John Jarratt, Melissa Tkautz, Dan Ewing, Roger Ward, Bill Moseley and a few more to give the fans a great cast and cracker Aussie creature feature.

Charlie’s Farm was incredibly violent. Will the violence levels be stepped up a notch for Boar?
[Laughs]. It’s a Chris Sun film. Use your imagination. [Laughs].

It seems every horror film franchise is being re-made or re-booted these days. If you had the opportunity to reinvent one of them which one would it be?
I really want to re-make the 80’s classic Trick or Treat. It was a great movie and I would love to sink my teeth into remaking it. It would be good to bring Gene Simmons back for a role also.

Boar is currently in pre-production. Charlie’s Farm will be released on DVD and Blu-ray June 17.

“This is a fun teaser we made for BOAR promotion. In 2 months we start full Pre- Production and in August we start shooting my first creature feature. I am so dam excited to make this movie folks.”

8 thoughts on “BOAR Exclusive! – “It’s completely different in every way””