Acts of God came out of my own fascination with natural disasters and their impact on people watching from the outside, particularly through the media. The idea first surfaced during the 2009 Victorian Bushfires when the papers were filled for weeks with stories of heroes and hell, despair and hope, god, miracles and angels.

Although sensationalist I didn’t think it was just a cynical media exercise but expressed a genuine craving people had to hear stories of intense life experiences. Events this extreme completely ruptured the mundanity of the everyday, particularly in a place as safe and comfortable as Australia.

I also remember watching the 2010 Queensland floods unfold from Melbourne and wanting to be there amongst it, in my hometown Brisbane. Perversely wanting to live through the extreme event with friends and family and be part of the sense of unity that appeared during the crisis and afterwards during the clean up.

Director Sarah-Jane on set with Eliza Wishart who plays Joan.

I saw these same intense emotional themes in Reality TV. Extreme home makeovers, weight loss, and competitions for cooking/dancing/singing. The shows are full of catharsis, tragedy, redemption, hope; much the same as the natural disaster reportage. Miracle Makeover, my fictional reality TV program within Acts of God, is juxtaposed against the natural disaster media and the drama unfolding between the family.

In the story Joan becomes frustrated that her family can’t vocalise the grief they’re experiencing, which leads Joan to take matters in her own hands. It’s set in working class, aspirational Australia that’s devoid of the traditions that help people overcome universally experienced events like death. In Acts of God I wanted to ask the question, What if a young girl believed a natural disaster was the answer to the bringing her grieving family back together again? 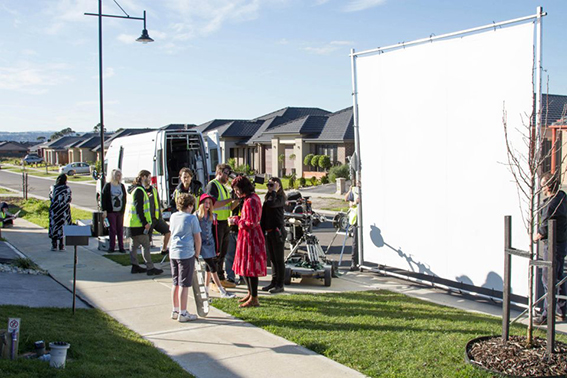 The cast and crew on set.

The biggest challenge of pre-production was finding a young actress to play Joan, the 11 year-old central character. She had to understand complex ideas, portray an unconventional child and carry the entire film. Joan is at the centre of every scene.  Eliza Wishart was an incredibly lucky find. Only ten years old at the time of shooting and had never acted on screen. Mature beyond her years, up for any challenge (there were many) and so much fun on set.

We had a ridiculously minimal budget for what was a hugely ambitious film. Almost all the crew worked for free on the week long shoot at ten different locations. There were literally hundreds of extras. It’s hard to imagine how we actually pulled it off until you remember how many amazing people came on board to help make it happen.

Steve Jablonski, my co-producer, was instrumental in pulling it all together. We shot on location almost entirely in Cranbourne North – using a Simonds show home as the interior of the family house, the local school and adjoined community hall. An entire street of a new housing development was closed down with multiple fire engines through the help of the Cranbourne CFA. The only location outside of Cranbourne was the Costco supermarket at Docklands – a fantastic spectacle of a grocery store, perfect for our consumer box scene. All these people freely donated their spaces and time to get the story off the page and onto the screen. It’s amazing what people will do if you ask nicely. 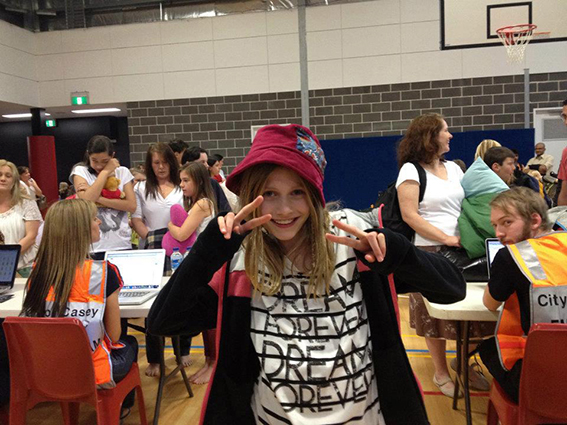 Visually I was interested in using the camera style and production design to mimic the bleak minimalism I see in the aspirational lifestyle aesthetics of modern Australia. Homogenous, clean, safe and controlled. This was a challenge for Tania Lambert our fantastic Cinematographer. Making bleak, functional, clean – essentially ugly environments – look great. Kudos to her for the terrible beauty of the images.

Post production is always a slight existentialist drama 😉 but I had fantastic collaborators with the talented editor Florence Holmes and wonderful post- production supervisor and colourist Kali Bateman, based at The Refinery.  The sound design with Markus Kellow was a great experience as there was so much that we added to the film through soundscapes. We originally finished the film at 20 minutes but after finally accepting that the 15 minute festival rule might actually be a real thing sucked it up and cut it down. I’m incredibly glad we did as it’s a better film for it.

You can find out more about the film at
facebook.com/actsofgod_thefilm
sarahjanewoulahan.com