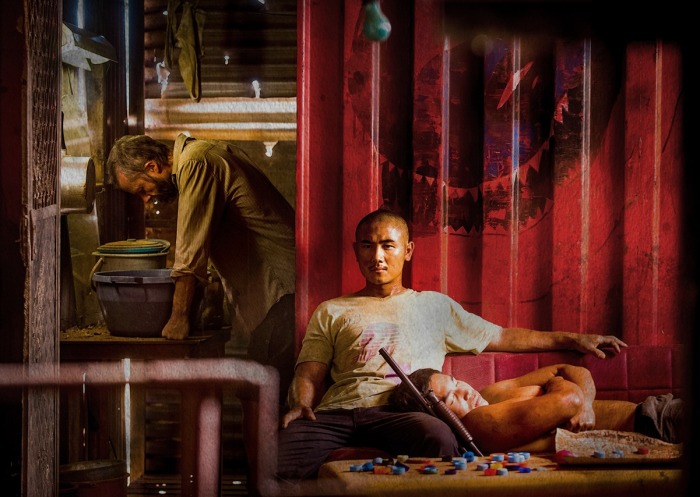 The Rover has an incredible back story: It’s the near future and Western civilisation has fallen victim to economic collapse. The ancient Australian Outback has found itself host to desperate immigrants from all corners of the globe looking to make a buck in mining. Lack of authority makes it easy for the desperate to exploit the weak which opens the door to a wretched and violent breed of criminal.

The audience isn’t told any of this, at all, throughout The Rover. It comes courtesy of an interactive gallery on the films website, not compatible with mobile devices (huh? – Ed). Not much use to an audience wondering what the hell is going on. All we’re given is a title card reading, ‘Australia. Ten years after the collapse.’

It’s at this point in time we’re introduced to Guy Pearce’s Eric. He’s an ex-soldier whose car is stolen by a gang of hardened crooks during a getaway. In his determined pursuit to get his car back Eric crosses paths with an abandoned gang member, Rey, whose been left for dead. Eric threatens to kill Rey unless he leads him to the gang and ultimately, his car.

David Michôd’s debut feature Animal Kingdom hit audiences harder than a gun butt to the back of the head. You would have been forgiven for thinking the director had been making films for years with his tale of a dysfunctional family whose dynamics are so whacky they’d terrify the Mansons. It’s because of this film’s success that The Rover has been so highly anticipated, but it’s nowhere near as good.

“It’s a pity all of this hard work, including Michôd’s as director, is ultimately let down by a dull, weak and rather pointless narrative.”

If you’re the kind of cinemagoer who likes your films with some pace then The Rover is not for you. After a very promising opening sequence Michôd’s story rapidly nosedives and takes too long to build up tension again. The script has very little dialogue and when it does it’s drawn out and without enough depth to keep you interested. His characters have no background so it’s hard to care too much for their predicaments.

In saying that, Guy Pearce makes magnificent use of what he’s given. He has got to be one of the worlds most underrated actors and as Eric he’s an absolute force. There’s a lot going on within this man which the audience is only given a glimpse of. We’re constantly wanting to know more about this rover and have to wait a long time to get it.

Robert Pattinson is especially frustrating as Rey, a seemingly simple Southerner who takes a little getting used to. He’s pivotal to Eric’s mission and becomes more bearable as the film goes on but his strong accent is hard to understand. When you cast Pattinson you get a built-in audience obsessed with his every move. A marketing tactic perhaps?

There’s a horde of talented Aussies behind The Rover including super producer Liz Watts, composer Antony Partos and Mr. Everywhere, David Field, who’s getting better with age. It’s a pity all of this hard work, including Michôd’s as director, is ultimately let down by a dull, weak and rather pointless narrative.

3 thoughts on “Review: The Rover”