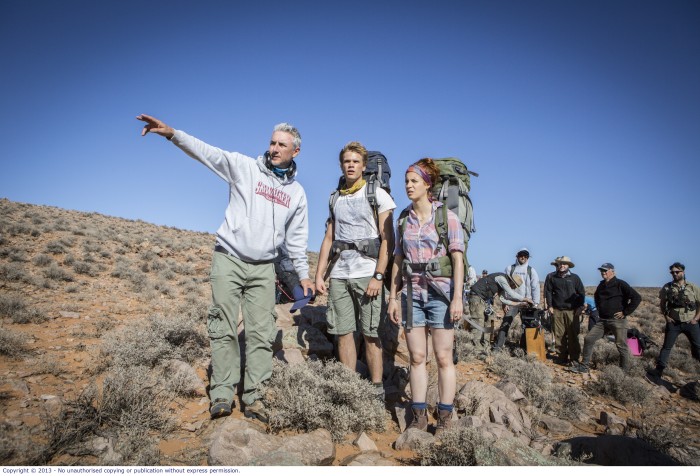 “I’m definitely not going to hire some bozo to spew one out just to make some quick bucks.”

Thanks to Wolf Creek and its world famous outback serial killer, Mick Taylor, Greg Mclean has become one of Australia’s most recognisable directors. Almost a decade after his terrifying feature film debut and seven years after Rogue, Greg Mclean returns with Wolf Creek 2, a sequel even more violent than the original.

It has almost been a decade since Wolf Creek. What kind of pressures where you under to make a sequel?
None really. Internally I was aware of the clock ticking away. We wrote a script but then I got attached to other projects. We did keep coming back to it to solve some of the script problems we where having which took a very long time to work out. The pressure to get it made was internal though. We kept thinking we really have to get on with it because sooner or later no one is going to remember the name Wolf Creek. So it was either now or never.

Did you feel pressure from fans of the original to make a sequel
People were always asking if there was going to be a sequel, but I wouldn’t say pressure. It was more just enthusiasm for it. When the sequel was announced we had a great reaction and enthusiasm from people wanting to see another film with Mick Taylor. I found that really encouraging to hear that people were still aware of the film and that a lot of people really liked the original. Again, it was encouraging that people had that kind of enthusiasm.

Did you and John Jarratt keep in contact between films?
Well John was in my second film, Rogue. We spent a lot of time in the Northern Territory hanging out together and we’ve been in touch over the years about various projects he’s been doing and that I’ve been doing. We had a script we were working on many years ago for a Wolf Creek sequel which was ok but it wasn’t great. It definitely wasn’t at the level we needed it to be. It probably took another year or two of developing before we really started adding elements that made the film worth making.

Horror is the genre your directing career has been mostly associated with. What is it about horror films that interests you the most?
I guess the great thing about horror films is that they’re audience reaction movies. I think comedy and horror are very much focused on getting reactions from the audience. If you make either of those films you can tell whether they’re working or not based on what’s happening in the audience. Because I spent so much time in theatre I’m interested in how to visually affect the audience. It’s a fun medium to play with on that level. Another thing is that horror films really allow you to create new ideas and jump over the accepted norms and to shock and surprise and do outrageous things. There’s a certain entertainment value for me in doing this kind of stuff. Horror films are just really enjoyable to make.

Is horror a genre you want to continue to work with?
Absolutely. As well as everything else. I’m interested in all kinds of films. In the future I’ll hopefully make drama, comedy and sci-fi and everything else in between. I certainly have a massive affection for horror films though.

Have you ever considered another director for a Wolf Creek sequel or have you ever been approached by another director who has told you they would like to try their hand at directing a Wolf Creek film?
Not so much directors but I’ve had writers who have pitched Wolf Creek sequel ideas to me. But interestingly, no directors. I don’t know why that is. I’m not sure there are that many directors around who would be interested. As far as another director goes, anything is possible. It would really be about finding someone who wants to take on this huge challenge because essentially the film would have to be better than the first one and better than the second one, it would have to be something really out there. Again, anything is possible and it’s certainly an interesting idea.

Do you think Mick Taylor could have the same longevity as characters like Jason Voorhees and Michael Myers?
If we keep making successful movies then certainly. The only impediment to that is that all of those franchises had episodes that were widely considered to be terrible. Essentially, I’m in charge of the Wolf Creek movies so it would be really hard for me to let a shitty one be made. And that’s the reason that we took so long with Wolf Creek 2 because we really care about the quality. I’m definitely not going to hire some bozo to spew one out just to make some quick bucks. It does’t work like that for me. If I cared less than it probably could work but to me it’s quality over quantity.

You trained as a fine artist specialising in painting. Are there any parallels between your painting and your filmmaking process?
All the time. There are certainly parallels. One of the easiest parallels to explain is that I tend to be a producer on my films, a writer and director, so the whole filmmaking process does feel like all of my skills are going towards making the one thing. To me the end result does feel like I’m creating a collection of images and sounds together which is kind of like making a big painting, without sounding to wanky. The difference with making a film compared to making a painting is that it feels like there is a lot of people holding the paintbrush with you.

Do you still find time to paint?
Not that much unfortunately. I tend to draw. Most of my drawings are based around the films I’m working on. I tend to do design sketches and story boards rather than paintings. One day, when I retire, maybe I’ll do some more painting but I’m very much focused on filmmaking now.

Who are some of your Australian filmmaking influences?
My favourite Australian film director is Peter Wier. He’s an extraordinary filmmaker who is amazing at his craft. I’m also a huge fan of George Miller who’s an amazing Australian storyteller. Also Fred Schepisi. The whole generation of 70s filmmakers, especially Bruce Beresford and Gillian Armstrong. They’re the kind of people who I grew up with. I’m also a fan of Baz Luhrmann. Every other week there’s a new Australian filmmaker kicking out something around the world. We’re spoilt for choice in Australia.

In some of the publicity shots for Wolf Creek 2 you’re wearing an E.T. shirt and a Skywalker Ranch jumper. Are Spielberg and Lucas directors who have influenced your filmmaking?
Certainly. They’re also directors who have influenced my love of movies. E.T., Star Wars and Raiders of the Lost Ark as well as every other Spielberg film are just extraordinary cinema and I’m a massive fan. I wear all of those kind of things on set to keep me inspired and to keep me loving what I’m doing. They give me a little more energy to keep going.

Do you have any interest in directing American films?
Over the years I’ve spent a lot of time in LA and I have American agents looking at American studio films and pitching to them. I haven’t been offered one of those yet but we’ll see. Never say never.

Do you have any storyline ideas for a third Wolf Creek film?
Not really, no. We have some loose ideas in place but sequels are only made for films that are successful. Hopefully Wolf Creek 2 works really well and if that’s the case then we will seriously get into developing it. Mick Taylor is a great character and there’s lots and lots of things you can do with him. It’s just a matter of the audiences begin there for the films.

What’s next for Greg Mclean?
I have nothing locked in right now. I’m looking at a few projects and I’m always developing lots of things and hopefully Wolf Creek 2 opens up a few more doors. I’m in LA at the moment looking at a few opportunities over here so we’ll see what happens.

Social Media Question by Cinema Australia reader Austin Keller: Which of your three did you enjoy making the most?
Well it’s a bit like picking your favourite child because you love them all equally. I’m not sure I can pick just one. They were all filmed at different times of my life and all mean different things to me. It’s really impossible to say. Having said that, Wolf Creek 2 was an amazingly cool shoot. It was one of those shoots where I could feel things working really well together, especially my great team. All of the actors were amazing. There was a really special feeling on this movie which I hope comes across in the finished result because it took a long time to get it out. Everyone on this film was really committed to making something that we were all really proud of. We all gave it our best shot to make a great movie.