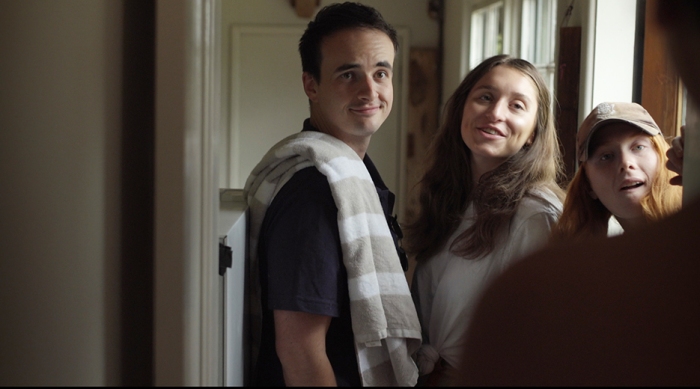 Meet the Cast of Suburban Wildlife

Suburban Wildlife, the debut feature film from director Imogen McCluskey, is set to have its Australian and international TVOD release on December 1.

The US company Gravitas will release the film on digital platforms, including iTunes, Amazon Prime Video, Google play, Youtube and many more.

Imogen McCluskey, who co-wrote the film with emerging Sydney-based writer and comedian Béatrice Barbeau-Scurla, was heralded as a bold new Australian directing talent when the film premiered at the 2019 Sydney Film Festival, where it was runner-up in the Audience Award.

Suburban Wildlife is a coming-of-age film set in Sydney’s outer suburbs, and explores the struggles of friendship, love, sexuality and independence faced by young adults. The dreams, desires and surreal yearnings of the characters play out against the hot tarmac, basketball courts, and swimming pools of suburban Australia.

The film stars an ensemble of emerging Australian talent, including Priscilla Doueihy who starred in Shannon Murphy’s ‘On the Ropes’ (SBS), and Hannah Lehmann who has gone on to create, write and direct the award-winning series ‘Two Sides’ with Snapchat.

The film is a triumph of micro-budget filmmaking, shot on a crowdfunded $4,000 budget.

Imogen has since gone on to much success. She is currently developing her sophomore feature film with Beyond Productions, a TV series with Easy Tiger and is attached to the Screen Australia funded webseries MASC. She has received acclaim for her award-winning music videos and her short film Atomic Love which premiered at the BFI Flare Festival in March, 2020 – and stars Maddy McWilliam and Priscilla Doueihy. In the first week of lockdown she released Love Bug, a web series about love and connection, again starring Maddy McWilliam and Justin Amankwah.

“We wanted our first feature to speak loud and be bold. To capture the light in the country, its humour and spirit,” says McCluskey. “This film is about the complexity of simultaneously being young and growing older: reaching a crossroads you weren’t prepared to meet. It’s all part of growing up, of becoming more than just suburban wildlife.”

One of the filmmakers’ key motivations for making the film was to represent a female lead who is struggling with her sexuality in a way that is understated and truthful to Imogen and Beatrice’s experiences as bisexual women.

“We felt that often queer narratives involve tragedy, sadness and loss, or a dramatic revelation that always seems disingenuous. In Suburban Wildlife, our lead character Nina is exploring her sexuality in her own way, making mistakes and fumbling, in the face of losing her best friend – who she realises she loves. There is no neat ending or resolution here, just as in life,” says Imogen McCluskey.