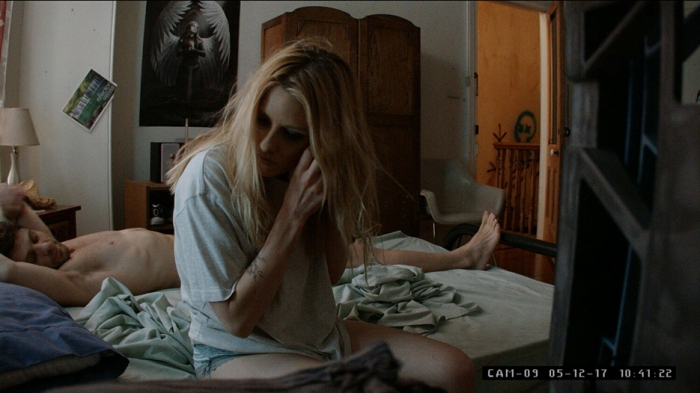 Stephanie King in We’re Not Here to Fuck Spiders.

Sam Curtain’s The Slaughterhouse Killer and Josh Reed’s We’re Not Here to Fuck Spiders will screen back-to-back on Saturday, 26 September during A Night of Horror International Film Festival – an annual horror film feast in Sydney.

The Slaughterhouse Killer follows a young parolee, with girlfriend in tow, who begins work at a small country abattoir and becomes mates with an intimidating co-worker harbouring a serious blood-lust. It isn’t long before their unlikely alliance is out of control, and the human blood is flowing. A new greasy and compelling study in very bad behaviour, small-town murder, and a ghastliness, Aussie-style, that will make you squirm.

We’re Not Here to Fuck Spiders is a fly-on-the-wall, found-footage horror that follows a psycho ice dealer, Anton (Lindsay Farris), and his low-life crew, including long-suffering girlfriend Effs (Stephanie King), go about their daily crawl, working towards a potentially lucrative home invasion robbery with the aid of a corrupt cop, Det. Sgt. Godfrey (John Cordukes), unaware that a rat has crept into their house and rigged it with hidden cameras

A Night of Terror describes We’re Not Here to Fuck Spiders as having shards of Bad Lieutenant and fragments of Dogs in Space; an immediate and inescapable hell.

You can get your tickets to both films here.