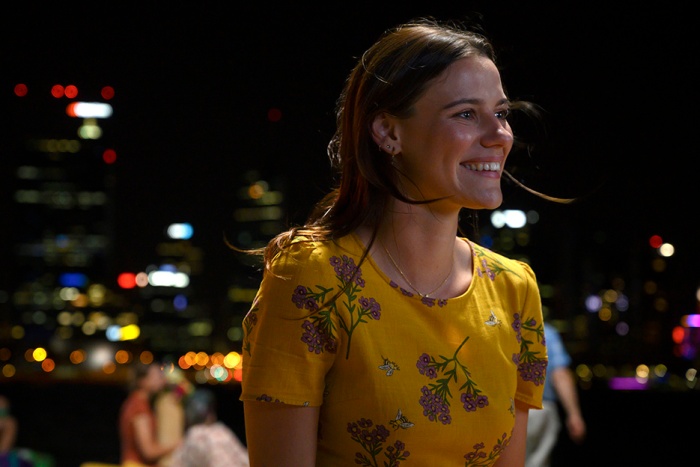 Lily Sullivan as Lucy in I Met A Girl. Photography by David Dare Parker.

It has been a big week for WA films with the announcement that submissions have opened for WA Made Film Festival 2021, the release of the Mystic Pines trailer ahead of the film’s world premiere at BIFF, and now the first trailer has dropped for Perth/Sydney-shot feature film, I Met a Girl.

Directed by Luke Eve and written by Glen Dolman (Bloom), I Met a Girl is produced by Adam Dolman, with co-producers Melissa Kelly and Ryan Hodgson and executive producers Timothy White, Tait Brady and Roger Savage.

A romantic drama starring Brenton Thwaites (star of Titans & Pirates of the Carribbean: Dead Men Tell No Tales), Lily Sullivan (Barkskins, Picnic At Hanging Rock), Joel Jackson (Miss Fisher’s Modern Murder Mysteries,) Peter Rowsthorn (Kath  & Kim) and Zahra Newman (Diary Of An Uber Driver), I Met a Girl was shot in Perth and Sydney last year and follows the story of Devon (Thwaites), a 20-something aspiring musician with schizophrenia, who relies on his older brother Nick to get by. On a downward spiral, Devon is ‘saved’ by Lucy – a mysterious girl who is just as impulsive and romantic as he is. When she vanishes leaving him with just a note to ‘meet me in Sydney’, Devon sets out on an epic, cross-country journey to find the girl of his dreams… who may just be in his head.

Brenton Thwaites as Devon in I Met A Girl. Photography by David Dare Parker.

Director Luke Eve, whose previous work includes the internationally acclaimed and awarded web series Low Life and High Life (also written by Glen Dolman) has recently been enjoying the success of his web series, Cancelled. The 10 episode series was shot on his iPhone while in total lockdown in Valencia, Spain earlier this year after his wedding was cancelled and Luke found himself confined to an apartment with his Spanish fiancé and his mother for five months. (Cancelled is streaming now via Facebook and has been invited to numerous international web-festivals.)

I Met a Girl will be released in Australia in mid-2021 via Label Distribution.