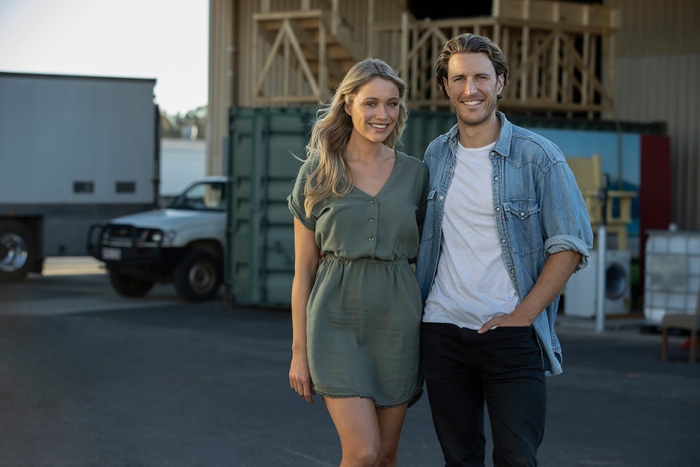 Production has commenced on the much anticipated feature film Great White, from Thrills & Spills and Piccadilly Pictures.

US ’30 Rock’ actress Katrina Bowden will star in the action packed survival thriller, which will be shot in studio as well as on location in Southeast Queensland.

The screenplay for Great White was written by Michael Boughen (Tomorrow, When The War Began, Killer Elite, The Loved Ones) while internationally renowned commercial director Martin Wilson will make his feature directing debut.

Michael Robertson teams up with Neal Kingston to produce the film following their collaboration on another adrenalin charged creature feature, Black Water: Abyss which is currently in post-production. Robertson says Great White is the perfect blend of horror and reality

“We knew as soon as we read Michael Boughen’s script we were on a winner; placing strong characters in conflicting positions in a world of fear that the audience can empathise with. For Thrills & Spills it’s the story telling we strive for.”

Great White, which is inspired by true events, taps into our most primal fear of the deep, and delivers the stuff of nightmares in the form of the ocean’s most dangerous apex predator.

It isn’t long though before their idyllic trip turns into a living hell when they become abandoned miles from shore and in grave danger from what lurks just below the surface. Their only chance of making it out alive is to get the beach, but with two Great White sharks hunting them, the odds are not in their favour. What ensues is a battle for survival of the most epic proportions against nature’s most lethal predators.

Kingston says Great White not only stays true to the expectations of fans of the shark film genre, it will have entire audiences embedded in the drama.

“Ever since watching Jaws as a kid I realised the effect a shark film can have on a movie audience. The fear you feel in the cinema and again venturing into the water is real. Great White draws on that fear and together with great performances, delivers a real and relatable experience, hopefully to a whole new generation of cinema-goers.”

Great White features a stellar cast of fresh Australian and New Zealand talent including Adam Jakubenko and Tim Kano as well as American film and television star Katrina Bowden. Currently appearing in The Bold and the Beautiful, Katrina is best known for playing Ceri’ in the multi award winning comedy 30 Rock for which she won a Screen Actors Guild award, the 31-year-old is excited to have re-located to Australia for filming.

“I am so excited to be back in Australia to shoot this film! It has been nine years since my last visit and this time around I am really getting familiar with beautiful Queensland. I feel very lucky to get the chance to work in Australia, especially on a film project I love so much that is unlike others I have done before. It is going to be a very fun adventure!”

Combining horror, suspense and edge of your seat thrills with our age-old fascination for deadly predators, director Martin Wilson says, “Great White will be a unique experience for audiences.

“The most important thing is that we tell a story and keep it as real as possible for the audience. Under the direction of Production Designer Adam Head, an array of sharks have been built, and by using a combination of techniques we believe Great White will have audiences completely engrossed and convinced it was worth buying the ticket. It’s all about the experience.”

Interest among international distributors for Great White has been unprecedented with pre-sales to more than a dozen international territories through Altitude Film Sales as early as mid-2018.

Great White is slated for release in 2021.