Roz Hammond in The Heights.

The Heights is ABC’s new 30 episode serial drama. It’s their own take on popular, long-running shows like Neighbours and Home and Away, although targeted at a much more mature audience.

As well as many newcomers, The Heights stars a handful of famous Australian faces including Roz Hammond, Marcus Graham, Dan Paris, Kelton Pell and Shari Sebbens.

The synopsis for The Heights reads like this: The Heights centres on the inner-city neighborhood of Arcadia Heights, exploring the relationship between the residents of the Arcadia social housing tower and the people who live in the rapidly gentrifying community that surrounds it.

Other than the sheer size of the internal sets at ABC’s East Perth studio, the first thing I notice during a recent set visit was the amount of young people shuffling around the place. They don’t just make up a large chunk of the cast, but the crew as well.

Energetic young cinematographers were grabbing cameras as they prepare for the next scene, others were ordering other cast members around with their clipboards and headpieces.

It felt like I was young again preparing for a school play, and I wasn’t alone.

“A part of the charter of this show is that it’s training a lot of young people, which is so great,” The Heights star Roz Hammond tells Cinema Australia as we chat between takes.

“This workplace is such a nurturing environment, but there’s something wonderful about being around lots of young people at the start of their career. They have a lot of enthusiasm. This is a really special job because of that.”

“I love this role so much. I feel very honoured to play Claudia. Her braveness and sass has rubbed off on me and she’s just so confident and sure of herself.”

You grew up in Northam, Western Australia. It’s a small country town where not much happens, and I can say that because I grew up there too. What drew you to acting?
I did grow up in Northam and I went to St Joseph’s. Dad was a Solicitor. I think mum and dad were there for over twenty years. When we moved to Perth, Dad got a job at a legal firm. I was nine. My siblings and I had always done speech and drama classes, and even in Northam we had a speech and drama teacher. I was a classic kid who didn’t fit in very well but I felt very comfortable doing drama. Mum had directed a lot of Northam plays and Dad had acted in some of her plays. The dressup box at our place was unbelievable. We were encouraged to play and dress up as different people. So i just took that to the next level. [Laughs].

Your first film role just happened to be Cheryl in Muriel’s Wedding, one of the most famous Australian movies ever made. Was that experience a good introduction to the industry?
Yes. And I just assumed that I would be doing only Aussie classics from then on. [Laughs]. It was a great introduction the industry. I had just left WAPPA and then for the whole of the following year I was unemployed. Towards the end of that year I landed a Bega Cheese commercial. I had no lines and I held a piece of cheese to a grater which then moved because the cheese wasn’t Bega. [Laughs]. I then got a role in a kid’s drama series before word started going around that this Australian movie was being made. I think they auditioned hundreds of people. It was just one of those movies that you had to audition for. There was a call-back process and it was really long. It was in the days before mobile phones obviously and I hadn’t had a call back in Sydney and I thought I had botched it. I was staying with my sister in Sydney at the time and I cried all weekend. When I got back to Melbourne there was a message on my answering machine since the Friday night saying that I had got the job. [Laughs].

It’s hard to imagine that we used to wait so long to receive or make a phone call.
I know! [Laughs]. You try to tell young actors that they have no idea how difficult it was. Sometimes you just wouldn’t leave your house if you were waiting for your agent to call, because it’s the only way they could reach you.

Is Cheryl a hard character to shake?
Occasionally. Especially because it’s such a much-loved movie. It’s such a wonderful thing to have on my CV. We all knew at the time that this movie was going to be huge. There was such a buzz about it and working on it at the time I just knew that this thing was going to be really special. You certainly don’t get that on every job. Many jobs you’re just happy to be working, but it’s rare to get that feeling that it’s going to be beautiful and creative and wonderful. 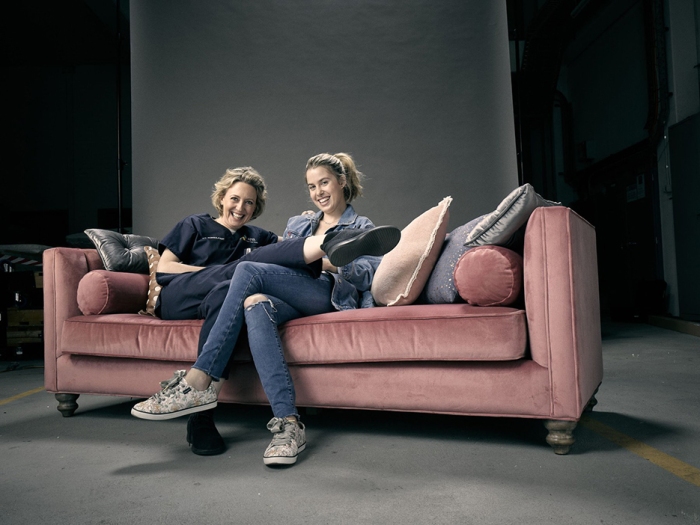 Roz Hammond and Bridie McKim in The Heights.

Tell us about Claudia Rosso, your character in The Heights. Describe her for us.
Claudia is great! Claudia is the closest character to me that I’ve ever played. I often play characters which are very different to my own personality. That’s been the best part, that her and I have so much in common. Not that I’m a single Mum or a doctor. [Laughs]. But we do have the same hair. [Laughs]. She’s great because she’s flawed, but real. She’s a single mum but she’s a doctor and a professional. She’s got a teenage daughter who she has a great relationship with. One of the joys of this job has been working with Bridie McKim who plays my daughter. She has a romance as well, but she doesn’t always get it right. I love this role so much. I feel very honoured to play Claudia. Her braveness and sass has rubbed off on me and she’s just so confident and sure of herself.

I watched you film one of your scenes earlier and you seemed very relaxed in this role. I think you even had a pair of slippers on.
[Laughs]. It’s so good to be able to come to work and wear tracksuit pants and slippers and lay on the couch.

The Heights explores a handful of complex social issues and themes. Can you tell us about some of those?
This is the beauty of the series. Not only have you got a whole mishmash of culture issues and parallel lives. Sometimes you intercept with people and sometimes you don’t. There is also that thing about teenagers negotiating apps and the world that thankfully we didn’t have to deal with like Facebook and sexting all that stuff. It deals with that as well as class issues and middle age romance. Without it being a calculated thing it ticks so many boxes because even if you don’t like one of the stories, you may like the next. There’s so much appeal. For that reason it feels special. Not only the exciting cast and that it’s so many people’s first job. The way things are tackled in this show is really special.

Arcadia Heights is described as a fictitious place that could be anywhere in Australia. What’s the first place you think of from your lifetime that best represents Arcadia Heights?
It’s sort of, in my head, a lot like Mosman Park in Perth. Mosman Park can have a dodgy section but there’s also a lot of gentrification around it. There’s less of a migrant population because it’s just outside the golden triangle. I think in my head when I think about a suburb that has quite a bit of juxtaposition, Mosman Park always strikes me as being close to Arcadia Heights. I’ve also lived in South Yarra in Melbourne and that has a very large housing commision in the middle of zero real estate. It’s a massive tower which must have a thousand residents in it. It’s right smack back in the middle of snooty old South Yarra. How great that the housing commissions are dotted everywhere, I love that. That has a vast contrast in South Yarra.

For good reason, productions are quick to let media know how much of a production is made up of males and females. The Heights production crew is made up of over 50% female. Is this something you notice on set, or does it just feel like any set from throughout your career?
All the female characters are strong and feisty in this show. Being on set, I do recognise that the crew is 50/50 but I come from a place where there have been so few women, especially in comedy. I’m usually one of two women in a cast. To me there feels like there are so many women here but it’s because I’m coming from a gender imbalanced comedy background where I’ve always been token. The vibe here is great across the board. It’s not necessarily a gender thing. It’s a very cool feeling out there.

You did two TV biopics back-to-back in 2007, The King and Curtin. We make some fairly average biopics in Australia, predominantly about middle aged white males, some worthy and some not so. I’m curious to know who you’d like to see a biopic made about.
Caroline Chisholm. I’m sure there a million people worthy. The stories of these women are only emerging now because of the patriarchal skew on history that I’m sure there a zillion women who would be great to make a biopic about. I don’t know enough about Caroline but I’ve just started reading a book about her and she sounds like a fine dame. [Laughs]. Not only is she on one of our notes but she was brought up often during my schooling. You’re right though, they are always about middle aged white men. [Laughs].

You directed a short film called Busting Out the Bells. Is there a career in directing on the horizon?
I loved directing. I teach acting which involves an element of directing obviously. Directing crew was great. If you’ve been an actor then obviously your concern as a director is going to be performance. If you have a great crew and DoP around you then you can discuss what you want to achieve and work together in a very collaborative way. That was the point of Busting out the Bells. It’s a nice little film. I need to lobby someone at the ABC so a wider audience can see it. It’s a Christmas film so maybe around Christmas time.

One thought on “Interview: Roz Hammond”