Small Town Hackers is the first Australian series to be commissioned by US digital platform, Above Average. The 6-part series was written, produced and post-produced entirely in Perth, Western Australia and debuted at www.aboveaverage.com on 30 October 2017.

I started as an intern at Mad Kids in late 2015, and my first job was working as a production assistant on two ABC projects back-to-back, DAFUQ? and The Legend of Gavin Tanner. Following my internship, I was invited to join the team and over the last two years, I’ve been assisting Lauren Elliott, Matt Lovkis and Henry Inglis across all aspects of writing, producing and the running of the business. As an aspiring Writer/Director, my goal has been to learn as much as humanly possible about what it takes to get a show made and how to “make it” in the industry.

Getting the opportunity to be in the writing room for Small Town Hackers was definitely an eye opener into how much effort goes into making something worthwhile. During my time on the writing team and as Director’s Attachment to Henry Inglis, I definitely developed more of an appreciation for how difficult, but also rewarding, filmmaking can be.

When the idea for a comedy about computer hackers first came about, it seemed like a simple enough premise: Track the development of a rabble of misfits from their beginnings as a “garage band hacking group” to a feared cyber terrorist organization that could match it with the likes of Anonymous or Wikileaks. We knew it could be hilarious, but we faced a few challenges.

A minor one being that we knew absolutely nothing about computer hacking. Well, apart from what we had seen on all those painfully cheesy 80s and 90s films that tended to portray computer hacking as some kind of keyboard boxing match. Get all sweaty and mash some keys really fast while you mutter something about the “mainframe motherboard”, that’s what hacking is, right? We had a feeling Hollywood had taken some artistic license when it came to its portrayal of the subject and the hackers of present day had probably come a long way from Matthew Broderick’s giant floppy disks. We were determined to showcase the authentic techniques used by the pros in the real world, so we brought in some hacking consultants who put us through a crash course. What we learnt confirmed our suspicions that real world computer hacking is actually much more interesting than any fictionalised version we could have come up with. The modern day hacker possesses many skills. They are of course excellent with computers, but they are also part con artist, part spy, and are even able to hack people using what they call “social engineering”.

When you give all of those abilities to someone with such an ambiguous moral compass, it makes for a really interesting character. This was one of the things that appealed to us about telling a story about hackers. Different hackers can be motivated by very different things. The real world organization of Anonymous itself suffers from a lack of single direction and factions within the organization have varying beliefs about what the group should stand for. There are those who argue that because Anonymous has the ability to enact social change, they have the responsibility to do so. On the flip side, many nihilist members of the group are more interested in playing cyber pranks and believe the world’s problems aren’t theirs to solve. Others enjoy the ego boost and power trip they get from the influence they wield. If you watch Small Town Hackers, you will see that each member of our fictionalised hacking group, ‘INCOGNITO’, sits somewhere on this spectrum.

We spent many long days in the writing room and went through many iterations of the show to try and get the balance between our characters right. Where the show was set, how our hackers met one another, the conspiracy they had to solve – it all changed many, many times and we frequently had just about the entire web series beated out before ripping everything down and starting all over again. It felt like there were a lot of plates to juggle when it came to Small Town Hackers. We wanted to create a serialised comedy/mystery with those cliff hanger moments that would have audiences thinking “This changes everything!” I had no experience writing a mystery. Coming up with the beats of a compelling mystery is hard enough without the added difficulty of having to ensure major breakthroughs are reached through computer hacking. We soon realised that often to make things work, you do have to stray slightly from what would be completely realistic in the real world of hacking. We weren’t making as much fun of those writers who had conceived those seemingly farcical hacking films of the 80s and 90s anymore. Another challenge was trying to keep the show as funny as possible without undermining the juicy conspiracy we wanted our hackers to uncover. It sometimes felt like we were writing two shows at once. For this reason, the tone of the web series was difficult to narrow in on. 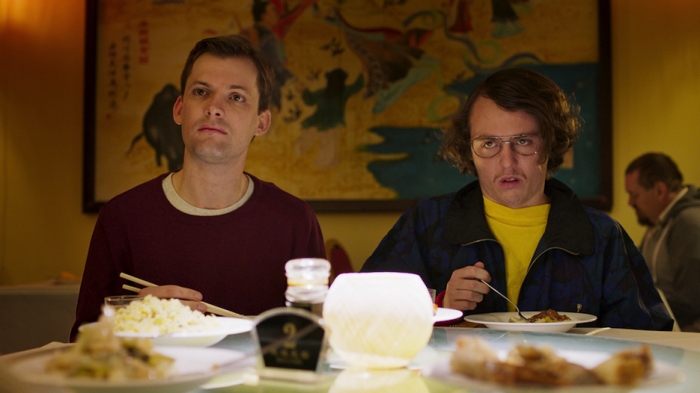 One of the breakthroughs we had in writing the show was when we decided to make the characters of Devon and Alex brothers. Building the central conflict of Small Town Hackers around Devon and Alex’s petty sibling rivalry helped a lot of the other pieces of the puzzle fall into place. It particularly helped shape the character of Devon, and Sam Campbell’s performance as Devon is one of the show’s highlights for me.

It was great fun working on Small Town Hackers and in the end I was very fortunate to be granted my first full writing credit on a Mad Kids project. I’m so grateful to Henry, Matt and Lauren for allowing me to be so involved on the show. We held a world premiere screening at Raleigh Studios in LA last week as part of ‘A Celebration of WA in LA’ thanks to Australians in Film, and the series premiered online globally this week. We can’t wait to hear what people think!

If you’ve made a web series you’d like featured on http://www.cinemaaustralia.com.au you can email us at cinemaaustralia@gmail.com