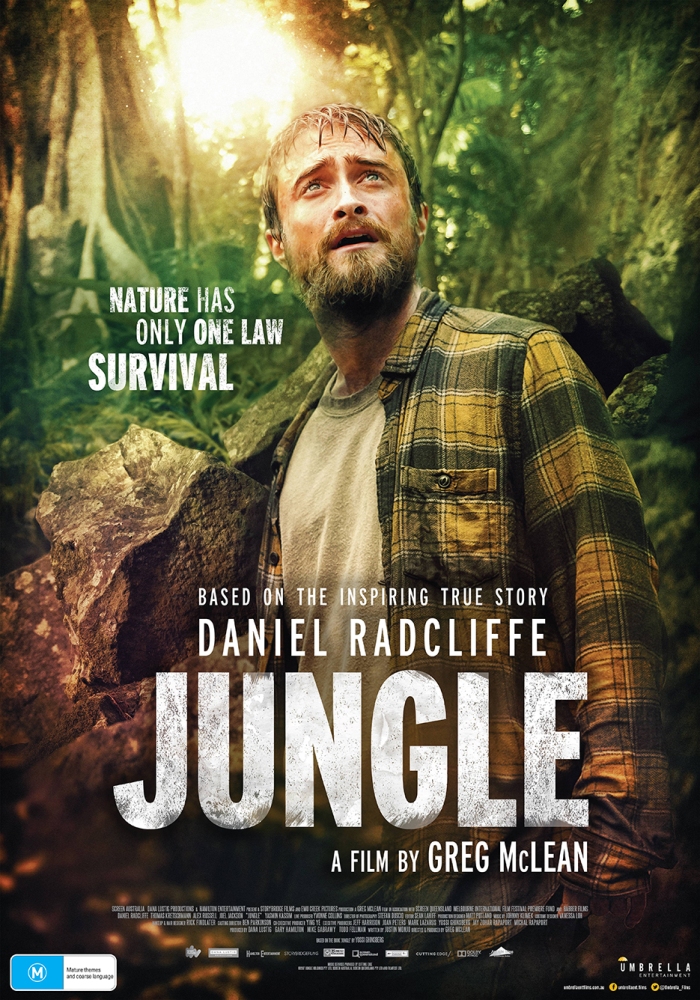 Four men venture into the jungle – but the jungle may not want to give them back.

Umbrella Pictures has unveiled the key art for the epic real-life story of survival against all odds, Jungle, opening in cinemas nationally November 9.

Starring Daniel Radcliffe as young Israeli Yossi Ghinsberg, author of the international best-selling 1996 memoir Back from Tuichi: The Harrowing Life-And-Death Story of Survival in the Amazon Rainforest, Jungle is a grizzly adventure into the depths of the Bolivian jungle. What begins as the realisation of a young man’s dream soon turns into a harrowing psychological test of faith and fortitude.

When 22-year-old Ghinsberg leaves behind a safe future and family in order to chase an improbable fantasy, events take a dark turn. He reaches the enigmatic Lake Titicaca in Peru where he and two new fellow adventurers, Kevin Gale (Alex Russell) and Marcus Stamm (Joel Jackson), meet the darkly charismatic Karl Ruchprecter (Thomas Krestchmann), and follow him on an increasingly nightmarish journey with meagre supplies into the jungle.

Directed by celebrated Australian horror specialist Greg Mclean (Wolf Creek, The Belko Experiment), Jungle is an intense and gripping drama that pits man against nature. Shot in Australia and Columbia, the film sees the four men confront dangerous rapids, Amazonian creatures, and the depths of their own psyches in a thrilling, terrifying ordeal, which tests not only the bonds of friendship, but the limits of human physical and psychological endurance. This is his unforgettable story.