Waltzing Tilda is the best Australian short we’ve seen this year. We couldn’t think of a better way to spend a cold Sunday night than watching a short film of such high quality. Enjoy.

Written and Directed by Jonathan Wilhelmsson
Produced by Raquel Linde
Starring Holly Fraser, Glean De Goya & Bandit the RabbitWaltzing Tilda is a Sydney-set comedy-drama about an eccentric lone wolf named Tilda who one day wakes up to find herself the last human on earth.

“Both teachers and students at the school were very sceptical about the achievability of the film and asked us to make something else instead.”

I’m a 25-year-old filmmaker from Sweden. I currently live in Sydney where I recently finished my studies at Sydney Film School. During the course my classmates and I made Waltzing Tilda. It’s a comedy-drama about an eccentric lone wolf called Tilda who one day wakes up to find the rest of humanity gone. It all takes place in a deserted, post-apocalyptic Sydney.

The film is a co-production between Australia and Sweden. I wrote and directed it and one of my best friends (and classmate) Raquel Linde from Spain produced it. The rest of the team is mostly Australian. Holly Fraser, a young actress who is mostly known for her theatre work, including War of the Roses where she played alongside Cate Blanchet, plays the main character. The film’s other star is Bandit the Rabbit who plays Tilda’s friend Shane, a foul-mouthed, talking white rabbit.

We shot the film almost exactly a year ago in several locations around Sydney, including the Opera House, Harbour Bridge, the Australian Museum and the Alexandria Hotel (a nearly 150 year old hotel that was set to be demolished but has since been saved, yay!). It was the most challenging project I have ever attempted, especially since we had quite limited resources. Both teachers and students at the school were very sceptical about the achievability of the film and asked us to make something else instead but that only made us more determined. There was a few times when I wasn’t sure if we would be able to pull through but everyone in our small crew gave it everything they had. 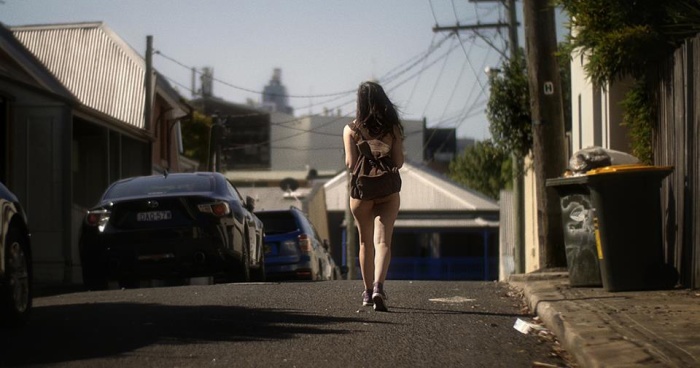 One of the reasons I wanted to make this film was to see if we, with limited means, would be able to create a world usually reserved for Hollywood productions, that of post-apocalyptic Sydney. With the help of some of my experience within visual effects we were able to shoot scenes in the city around thousands of people that I would then digitally paint out, leaving only Tilda. Some of our bigger scenes include Tilda blowing the head of the Queen Victoria Statue, painting graffiti on the Opera House and demolishing Centrepoint tower.

The film premiered at the 25th Sydney Film School Festival last December where it, amongst 180 films, won the awards for Best Director, Best Producer, Best Editor and the Audience Award. It was an amazing night. We were so proud and relieved that people liked our film, and on top of that George Miller (director of Mad Max) attended the festival. It was incredible to meet such an influential person who is probably one of the reasons I’m even making films. The film is also an official selection at the Depth of Field International Film Festival in USA and an award nominee at the Stockholm Independent Film Festival in Sweden.

I’m so excited to share this with you! When I was a 13-year-old growing up in a small village in Sweden and making stupid films with my friends I never thought I would one day be making films in Sydney and winning awards.