Ravenswood will be released through Uncork’d Enterntainment in the US and Ignite Pictures and Marquis Productions Internationally in March 2017. Ravenswood recently won the award for Best Horror Film at the Los Angeles Independent Film Festival Awards. Executive Producer Adam Horner, who also played the role of Carl in the film, commented that, “Ravenswood initially caught my eye because it is a movie that I knew would have a huge international audience. I have to give huge credit to director JD Cohen. This was an incredibly low budget Australian film and it was a tough shoot, but we pulled it off, and I am excited for the world to see what we have created.” 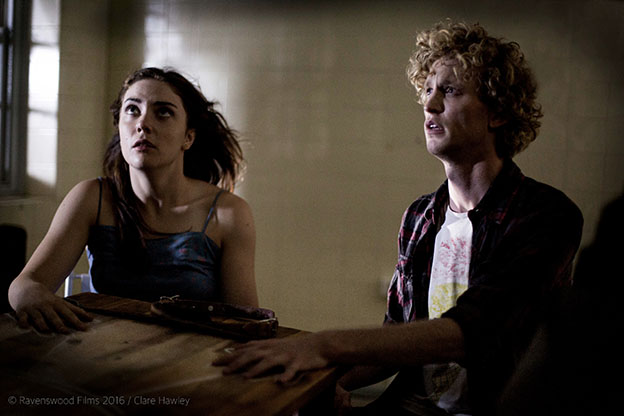 JD Cohen, director of Ravenswood attests to how hard the shoot was, having had almost zero budget, and intense 12 day shooting cycle. “It was a challenge to shoot the film so fast, especially as we had stunts, a car crash, a 2 minute steadicam sequence with a dozen people in the shot, this was not a single room, two people talking type of film. It was ambitious and we had to commit to shots, not just shoot coverage and sort it out in post. But the cast and crew rose to the challenge, and we made a film we can all be proud of”.

Executive producer Michelle Horner said, “I am very proud of everyone involved in this movie. Ravenswood shows that we have the talent and the ability here in Australia to make independent films that sell and compete with the movies made in the US.”

Isabel Dickson who played the role of Belle said, “It’s all very exciting. Initially this seemed to be a small independent movie but as things have progressed, Ravenswood has evolved into anything but.”

Actor Shane Savage said, “Pulling together a world class production on a shoe string budget was definitely challenging at times but JD Cohen and the crew made the process so much easier with their professionalism and ability to keep the set motivated with laughter… and coffee.”

Madeline Marie Dona said of her experience shooting at Callan Park, “The first day at the location stood out to me the most eerie! We actually had a crew member drop out of production because he had a couple scary experiences in the hospital while we were shooting.”.

“It was a little spooky walking down the hallways alone,” commented Ashley Fitzgerald. “I got spooked every time and I would often run back to the crew and then act cool.”.

Ravenswood will have its world premiere in Sydney on the January 7, 2017 at the Hoyts in the Entertainment Quarter. Tickets are now available to the public for the premiere and can be purchased through Eventbrite.

2 thoughts on “Trailer of the Day: Ravenswood – World premiere announced!”