The Chant of Jimmie Blacksmith

Aussie film writer/director/producer Fred Schepisi, fresh into serious filmmaking at just 37 when his debut The Devil’s Playground was released, then followed it up with The Chant of Jimmie Blacksmith (an adaptation of Thomas Kineally’s novel) that was as concerned with its culturally important themes as his predecessor, but resulted in a far less optimistic and far more aggressive film. It was certainly an arthouse drama that was for the serious crowd (like most of the dramas, especially period films, of the Australian New Wave), but had the brutality of the realistic horror films that were made at the time, as this film also deals with familiar areas of the revenge sub-genre such as violent, brutal murder, as well as the social injustices that aggravate it.

One of the first Australian films ever (not just of the New Wave) to focus on Aboriginal lives, our titular character (Tommy Lewis) is a half-Aboriginal and half-white young man, who is persuaded to steer clear from his ancestry and his Aboriginal friends by his adoptive father Reverend Neville (Jack Thompson), firstly in the pre-credits scene being caned after going missing for three days when he was on a ritual walkabout. He tries everything to do the right thing by getting various jobs building fences, but he gets short-changed by his bosses who believe the measurements of his tasks were off.

He even marries a white woman named Gilda (Angela Punch McGregor), but their baby turns out to be entirely white with not a trace of black. Although Gilda is committed to staying with Jimmie, the Newby family, who provide them with food and resources in exchange for Jimmie’s services, attempt to persuade Gilda to leave Jimmie and re-marry (presumably to a white fella).

The classic paradox of the (racial) outsider is clearly presented here, showing that although Jimmie eagerly tries to do the right thing by assimilating into regular white-person culture and way of living, outside forces from the stuffy powers that be force him into desperate positions, resulting in such emotional instability in this angry young man that is causes him to commit crime, violence, and murder (even of a white baby, played by Schepisi’s own daughter). Jimmie, along with his Aboriginal half-brother Mort (Freddie Reynolds), go on a vengeful killing spree, targeting those that wronged him.

For complete newcomers to the craft of acting, both Tommy Lewis and Freddie Reynolds are just about completely at ease with their startling dynamic performances – both must perform playful and yearning characters before delving into much darker, more hateful, and more amoral territories. During the horrific third act, Lewis is the one portraying the stoicism and self-assuredness in his violent acts whilst Reynolds conveys the more perceptive and emotionally distressed role, which is just one example of how Schepisi has revealed such contrasting characters of different values and compulsions across both whites, blacks, and mixed race folks. It is these two main characters that are responsible for most of the film’s mood, setting up its racially hostile, yet still cheery-in-the-face-of-adversity mood at the beginning, then slowly bringing this atmosphere down into darker depths as Jimmie is visibly shaken by his injustices – all of which hits its zenith during the first (and sudden) outbreak of violence.

As we follow the journey of Jimmie and Mort on the run, the film becomes slowly, but progressively more and more mystical in an uncomfortable and abyss-gazing way, namely Mort’s death scene, which first shows him at his most distraught covering his face in white ash. This under-lit shot manages to show this new white emerge from the incredibly dark blue hue of the shot, again showing the marvellous and inspired work by cinematographer Ian Baker (who similarly worked on dark shots in The Devil’s Playground). We then see Mort in the morning daylight, clearly seeing his dark face now covered with a whiteness that certainly doesn’t make him look Caucasian, but more like a theatrical villain – acting as an example for Jimmie and other mixed race folks, the white assimilation of this dark-skinned indigenous man has resulted in an awkward racial dysphoria (that soon has him murdered).

As great as the acting is from these two, I’m tempted to say the best acting from an Aboriginal in this film may come from Steve Dodd who plays Tabidgi, Jimmie’s uncle, who adds a lot to the Aboriginal perspective of Jimmie’s violent acts. His reactions during and after the initial killing spree that he is involved with are brimming with guilt and a deep sense of shame, but he also seems to be diverting the blame from being a racially encompassing matter to more of a simply personal one, and this excellent piece of acting in a very small role goes to show how great Fred Schepisi and his casting director wife Rhonda are at filling small roles with great contributors. 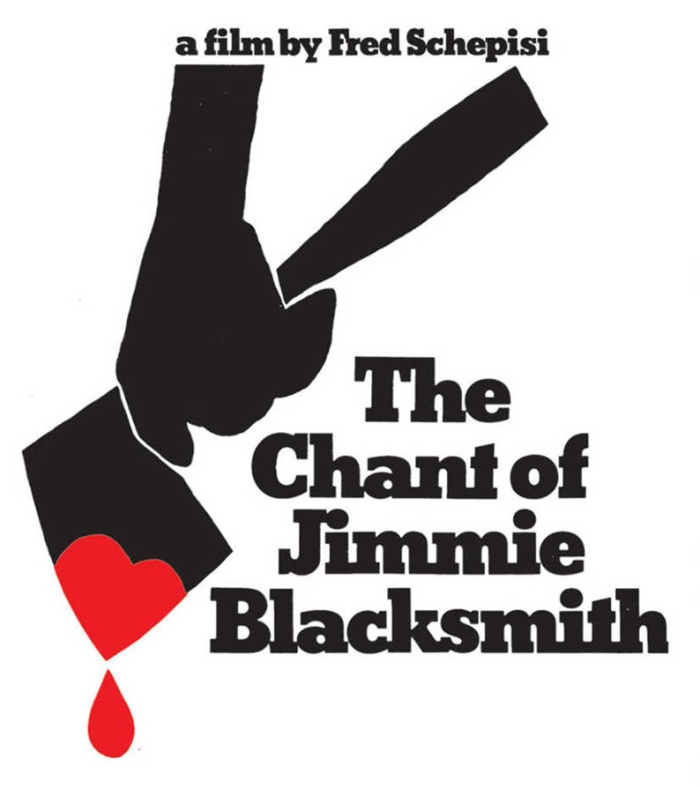 “Black bloody bastards”, the first line of the film, spoken by Neville, is repeated numerous times in response to Jimmie’s horrendously violent actions, as well as to the general state of the Aboriginals. Much hostility is given to Jimmie by the white folk and they are highly reluctant to accept and nurture his eager assimilation into their culture, such as from his constable Farrell (Ray Barrett) whilst working at the police-station, and his first freelance boss Healey (Tim Robertson). But of course, from the multifaceted minded Schepisi, there are the white characters with more racial temperament and understanding. There is the schoolteacher who gets taken hostage, McCreadie (Peter Carroll), who seems educated enough to understand Jimmie’s actions must stem from the troubling treatment he has faced. The problem with McCreadie and his wife is that they seem too nice – when they laugh too hard and too long at Jimmie’s joke, it doesn’t do many favours for them. Arthur Dignam, who was superb in The Devil’s Playground, also plays a small role as the inquisitive Knoller who questions the hangman’s efforts for when Jimmie is inevitably caught. Not-yet-established actors like Bryan Brown and John Jarrett also made brief appearances.

Thomas Kineally, who also appeared in The Devil’s Playground, is an Australian author who took the basis of the true crime story of the murders committed by Jimmie Governer and turned it into his 1971 novel. Schepisi adapted this into his screenplay, with assistance by Kineally, who appeared very briefly in the film as a cook. The actual crime took place in 1900, though was brought forward a year for the film so that it could take place just as the federation of Australia was established. The details of Jimmy Governer’s life match quite closely to that of Jimmie Blacksmith, with Jimmy, his brother Joe, and his friend Jack Underwood attacking the women at the farm that provided Jimmy’s family with rations over a racial dispute. Jack was quickly caught, but Jimmy and Joe went into hiding for fourteen weeks, terrorising and even killing those they felt had previously wronged them.

Schepisi, like with his first film The Devil’s Playground, put a lot of his own (and his friend’s) money into producing this film (about $250,000, almost the entire budget for The Devil’s Playground), which ended up with a budget higher than any other Australian film at the time (although may’ve tied with the box-office blunder Eliza Frazer). Though instead of taking three years to raise $350,000 like for his last film, the financing this time only took three months to raise $1,200,000. Mr and Mrs Schepisi scouted many Aboriginal communities for the lead role, and managed to gain a few extras. They ended up finding their lead when fogbound at Melbourne Tullamarine airport before heading to Perth for a festival showing of The Devil’s Playground and Rhonda spotted Tommy Lewis, whose appearance alone greatly appealed to the couple. They greeted him and managed to convince him to fill in the role, and there was more good casting luck to come – they were invited by him to a party, where they then met Freddy Reynolds, who similarly appealed to the Schepisis and they cast him as Mort. Neither had done acting before, but they were enthusiastic and very willing to learn. It took a while to get the acting skills that were within Tommy and Freddy, though with the help of Fred Schepisi and acting coach Michael Caulfield, they became less embarrassed by revealing their emotional side and they were also a bit more enunciative in their speech and delivery. When watching them in the film, only a mild amount of amateur quality can be seen from them in two otherwise remarkable performances, instinctive in their Aboriginality (evident in their bush-friendly physical performances) and supportive of the confronting nature of the film.

The Chant of Jimmie Blacksmith was initially controversial for its high budget and then predictably received even more controversy for its blood-soaked racial themes. Some movie-goers were uncomfortable, though others were thrilled and invigorated by this exciting film that felt like a sympathetic and revolutionary film for the Aboriginals. Just like The Devil’s Playground, it was a critical success across the globe (receiving very positive reviews from Pauline Kael, Gene Siskel, and Roger Ebert), but due to the heaviness of its themes and content, it wasn’t much of a commercial success and didn’t quite recoup its budget upon its release (and with that, Schepisi went to the US to make films and didn’t come back til 1988 with Evil Angels, known overseas as A Cry in the Dark).

Schepisi felt he received a lot of credit for Lewis’ work, but as he states in the DVD commentary you can’t direct acting entirely when you get the camera that close in on their faces, as he did on the remarkable acting of Lewis and Reynolds. The film received 12 nominations at the AFI Awards and it was mostly snubbed in favour of the excellent Newsfront, but unfortunately Tommy and Freddy missed out on a nomination for themselves (the fairly brief roles from Ray Barrett and Angela Punch McGregor earned them awards). Given newcomer Simon Burke received one for his memorable debut performance in The Devil’s Playground, Tommy’s equally memorable (or even greater) performance wasn’t quite as recognised.

A film like The Chant of Jimmie Blacksmith seems very likely it wouldn’t be made today and there’s currently no sequel or remake on the table. Given the lack of an Aboriginal presence in Australian films, it must’ve been a shock back in the ‘70s to see one of the first to seriously portray them cinematically in lead roles and in such a tumultuous and thoroughly upsetting story, but it helped pave the way for many decades to come. Many films centred on Aboriginals now such as Samson and Delilah, Toomelah, and Mad Bastards (along with historically important period films like Rabbit Proof Fence) show Aboriginals within their extraneously disenfranchised environments, but with less aggression and more temperance than Jimmie Blacksmith – more wars being declared within the narrative of their modern films would still feel appropriate today.