Apparently one of Harrison Ford’s favourite films, this is another stunning directorial debut from a young Australian filmmaker and one of the very best of the Australian New Wave, with Newsfront being released in the late ‘70s, hot off the trails of the likes of Sunday Too Far Away, The Chant of Jimmie Blacksmith, and Picnic at Hanging Rock. Newsfront is an excellent celebration (and slight criticism) of Australia’s unique culture, as well as a rollicking journey behind the scenes of the newsreel era, showing us the on-the-road excitement and the in-studio arguments, as well as glimpsing into the political turmoil of the anti-communism hysteria that was going on in the country at the time.

Charting its way through 1948 to 1956, in black and white, colour, and through actual newsreel material, this film tells the tale of the Australian cameramen who were willing to put their lives on the line to film some of the most astonishing and important occurrences during this time period, in the name of fair and balanced news reporting. We mainly focus on Len Maguire (Bill Hunter) and his protégé assistant cameraman, Chris (Chris Haywood), as they film the newly arrived immigrants on the boats, a large cross-country car race, and, most dramatically of all, the 1955 Maitland floods.  We also look into the personal side of Len’s story, with his infidelity with co-worker Amy (Wendy Hughes) and his temptations to join the American production company his brother Frank (Gerard Kennedy) works for. 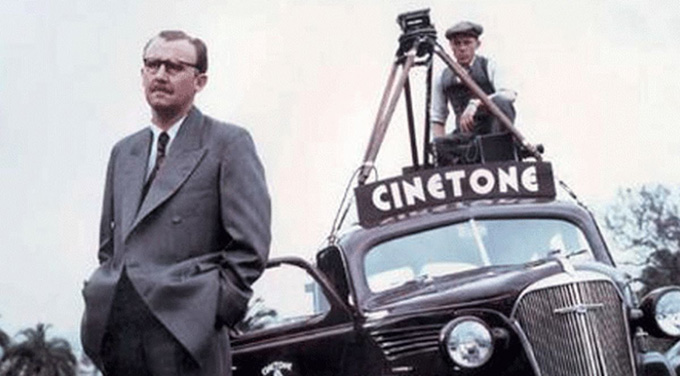 It may be the most overused word on the internet, but this film is genuinely epic. Spanning nearly a decade of one of most pivotal times for the media in Australia, this is an incredible fictional documentation of the Australian media in the late ‘40s and early ‘50s, incorporating a stack full of actual newsreel footage from the times. One of the more technically impressive sequences of the film involve the Maitland floods, which actually mixes film and newsreel together, which is done so seamlessly and adds a greater scope to the tragedy and not only how it was documented by the media crew, but how it affected them as well. Through a mix of larrikin Aussie characters continuing to shed their British heritage and establish an Australian culture, we begin to understand the range of different responses to the media trickery in this politically tumultuous time, but luckily Len is the quintessential journalist with integrity, someone that believes in not only democracy, but fair reporting. Grouse!

There’s newsreel footage aplenty in this film, most of it diegetic and part of the cinema the Australian movie-goers are watching or the screening room being edited on in the Cinetone Studios, and some of it is non-diegetic like when it’s mixed with filmed footage in the floods sequence, as well as the beginning and end credits of the film which show a barrage of priceless newsreel footage such as Chico Marx singing Waltzing Matilda with troops, The Beatles’ down under performance, the city streets just after World War 2 was declared over, and (the most horrifying one to be one of the first) a race-car crashing into a crowd at full speed. This archived footage was taken from Screen Sound, formerly Cinesound/Movietone itself, and the film was edited in a fast paced rhythm to match the editing style of the newsreels.

According to Noyce and co on the DVD commentary, Newsfront began as an idea from producer David Elfick as a documentary on Australia’s post-war history called Our Time (taking place from the mid-40s to the mid-50s, the same time as the finished film), made up mostly of newsreel footage. Then came the idea to intercut this footage with a fictionalised story about two kids (one an Aussie, the other an immigrant) growing up throughout the ‘50s to the ‘70s in Australia, which then eventually materialised into a story about the men behind the newsreel footage (with the immigration theme still intact). The screenplay took two years to write, with copious amounts of research evident in the finished product, initially written by Bob Ellis, along with help from former newsreel cameraman Howard Rubie, veteran cameraman Sybil Wood, and Ellis’ wife Anne Brooksbank. Ellis later took his name off the project that he thought was becoming pro-communist, though he later claimed the real reason was because of the numerous cuts that had been made to his screenplay – he ended up putting his name back on after he was moderately pleased with the finished film, though still thought it would’ve been better to stick with his screenplay.

After the first assembly cut screening, Noyce was so distraught with how the film was turning out that he spent two days in bed, contemplating becoming a teacher rather than a filmmaker. He claims adding songs from the film’s era helped enormously with keeping it more focused – I can’t see how music itself would’ve saved this film, I just think Noyce was being very self critical. He probably needn’t worry, as the film has been greatly praised by many audience and critics, including David Stratton who claims it is the single best Australian film ever made. It ended up being nominated in every category at the AFI Awards, winning 8 including Best Film, Best Director for Noyce, and Best Actor for Bill Hunter. Newsfront is a loving dedication to film, and this reflects upon the movie itself, rejoicing in the filmic archive of newsreels and films that have established (or at least reflected upon) our culture – hopefully this film won’t be as forgotten or seem as transient as the newsreels themselves. Funnily enough, director Phillip Noyce became more of a Frank Maguire than a Len Maguire as he went on to later make a number of American productions, most (or all) of which don’t hold a candle to his debut masterpiece, but at least Harrison Ford got to work with him a couple of times.

Note: This review is an extended and edited version of ‘Newsfront’- Australian Revelation Series at The Backlot cinema’ from Colosoul.

One thought on “Retro Review: Newsfront”