“We were on an incredibly tight deadline, our location for the film’s opening scene was almost wrecked by a freak thunder/hail storm and Daniel Hill broke one of his ribs.”

Growing Out: Written by Andrew Walsh

Matt and Dan have been close friends since they were 5 years old: they attended the same school, played on the same teams, went to the same university. Years later, they still meet every Thursday at Dan’s place to watch the footy and drink too much beer.

One night, when their beloved team wins a big game, an over-enthusiastic celebration unexpectedly turns into a drunken kiss. The next day Dan can barely recall the incident, but Matt remembers it all too well and is forced to confront feelings he’s avoided his entire adult life. And next week he’s getting married. 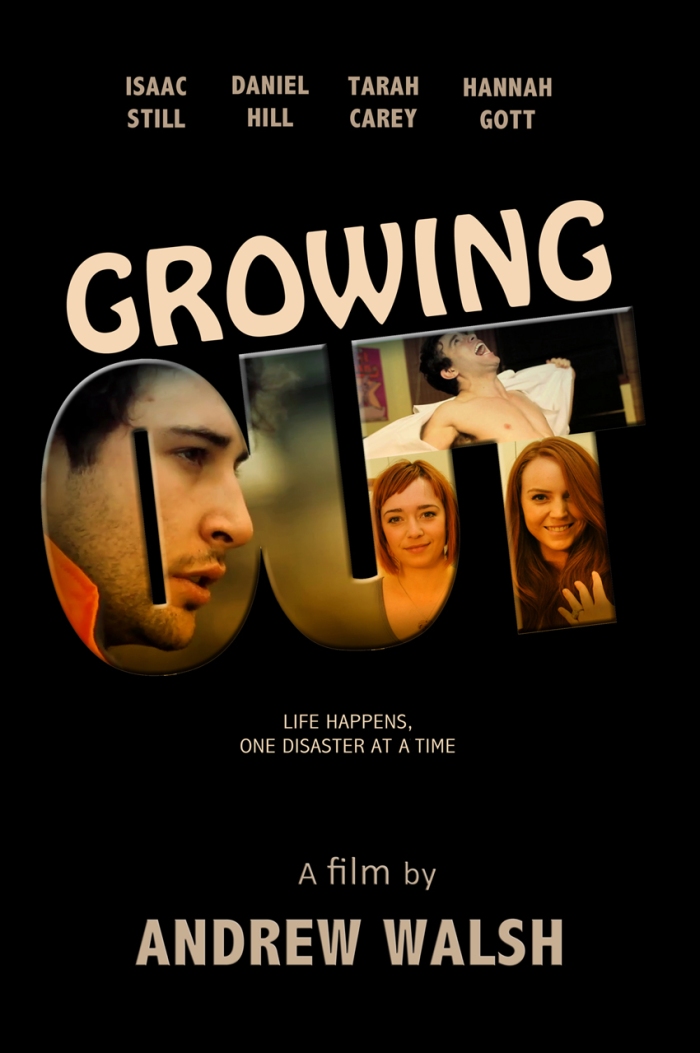 I wrote the script for Growing Out in early 2013. This was my fourth project and I wanted to get out of my comfort zone to step away from my darker work and move into a more positive direction. The first three films were very dark pessimistic stories about disenfranchised loners trying to survive and I wanted to branch out into comedy make something lighter but still tackle an emotional topic and use humor to get the story across. 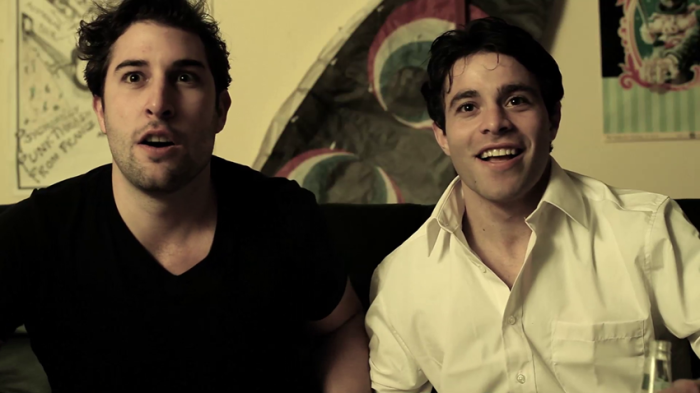 I didn’t have to do a massive amount of research into the subject matter. I grew up in a town called Whyalla on the Eyre Peninsula which is about 5 hours north of Adelaide. Like many of those areas football is more then a sport it’s a way of life. A few people I went to school with have gone onto play professionally in the AFL.

There’s a lot of racism homophobia and misogyny which is very prevalent and visible.

I moved out when I was eighteen to get out of that negative environment and follow my dreams of being a filmmaker. Since then I’ve always known a lot of people in the LGBT community and have seen up close the damage homophobia does. I wanted to make a film that explored what happened when these two worlds collided.

Years ago I read a quote by a writer whose name I cant remember but it always stayed with me. It said “There is a thin line between laughter and pain”

That sums up the way I approached this films balance between drama and comedy. 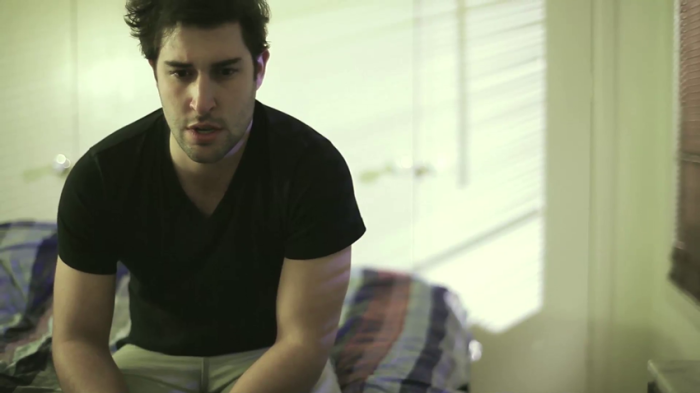 Once the script was developed things fell together pretty quickly. The same production crew from my previous short Empire Of Nowhere loved the films premise and we were all keen to work together again.

Llywellyn Staiff a colleague and writer and director whose work I’d admired for a long time kindly let us use her house as the principal location.

The cast was a mixture of old and new faces. Daniel Hill (Dan) and Hannah Gott (Jessica) had appeared in my previous films so I wrote their roles specifically with them in mind.

Tarah Carey (Sarah) was fantastic to work with and Isaac Still (Matt) was clearly head above shoulders compared to the rest.

A lot of actors read the script for the character of Matt and were very confronted by the material and only wanted to be involved if the films profanity and sexual content was cut down which I absolutely refused.

Isaac on the hand didn’t flinch at all and saw the whole thing as a great adventure.

We didn’t actually do a great deal of rehearsal. From what I remember we only did 3 sessions at Isaacs’s house across in the two months leading up to shooting.

The rest of the time we just saw each other socially hanging out at pubs going to lunch things like that. We didn’t really discuss the film too much.

I think the most important thing you can give an actor is your time. Every single one requires their own individual form of guidance and direction in order to get where they need to go to give that great performance.

I met cinematographer Justin Brewster through Daniel who had worked with him previously on Improv Sessions which is a groundbreaking series of short films, created, produced and finished all in one day with no dialogue script or storyboard.

I’d been a big fan of the concept since the beginning and when Justin and I finally met in person we got along famously.

We didn’t really do any storyboarding or much planning. We caught up a couple times for a coffee prior to shooting and we bounced ideas off one another about what kind of look we were aiming for.

Our spontaneous anything can happen approach worked out really well. 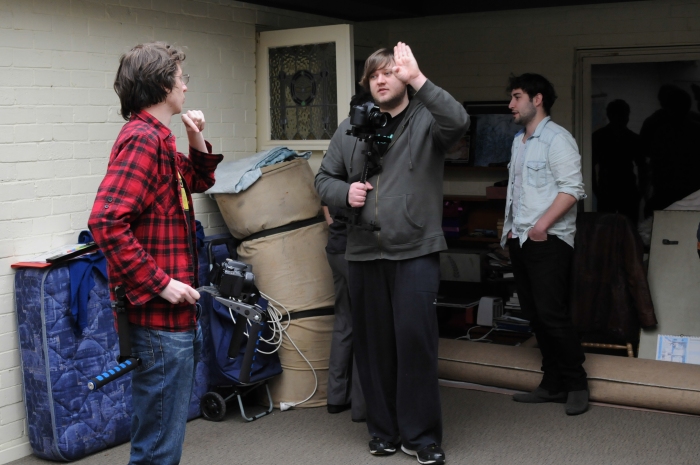 Like every shoot we had our share of challenges. We were on an incredibly tight deadline, our location for the film’s opening scene was almost wrecked by a freak thunder/hail storm and Daniel Hill broke one of his ribs in an accident the night before shooting!

Despite all these challenges we had a lot of fun and managed to do the entire film in two and a half hectic days.

After a tough shoot and almost a year of post-production Growing Out made its premiere at A Final Cut which is a monthly film event in Melbourne in September 2014. The organizer Richard Harris is really passionate about supporting young filmmakers and giving them a means to show their work and was behind the film from the day one. The initial reception was fantastic and it’s had a good run at Independent film venues across Melbourne.

There’s been a few noses put out of joint along the way. Some critics have totally missed the point of the film and accused me and the cast of being homophobic! It doesn’t bother me. No matter what you do there’s always going to be people out there who interpret satire as fact.

Other then that all the reviews for the film have been overwhelmingly positive.

Despite not getting any film festivals in Australia yet we’ve recently been accepted into the Rendezvous film festival which takes place in Florida, America on June the 9th.

According to the festival organizers we were few out of over 1900 entrants from all over the world to be accepted.

It’s a strange bittersweet feeling when our films are attracting more recognition and attentions overseas then they do in our own country.

But by far the most rewarding experience is meeting men and women at screenings who come from the same background or went through the same experiences as the two characters and said how much they enjoyed the film and related to their journey through the good bad and ugly.

I think whether you’re a filmmaker a writer a musician or an artist every single time you create something you’re trying to capture a truth that people connect with on an emotional level.

I’m confident that we’ve achieved this with Growing Out.

When I’m not promoting Growing Out I’m working to finish my fifth short film I Miss The War. It’s definitely the most ambitious and personal project I’ve made so far. I’m hoping it will be premiering towards the end of the year.

It’s about three very different sisters who reunite on the anniversary of their mother who died nine years earlier.

At this point in my career it feels like things have come full circle.

The Comedian and Rearranged were inspired by what I went through on my twenties. Empire Of Nowhere and Growing Out is based on my teenage years and I Miss The War is based on my childhood.

Other then that I have no plans to do anymore short films for a while. Right now I’m working on a feature film adaptation of Empire Of Nowhere and have begun another feature film script I intend to direct in 2016.

I can’t reveal too much at this stage other then the title is The Shallow End and James Barr (The Comedian) Is locked into playing one of the main roles.

I’ve learnt a lot in the past five years since I made my debut with The Comedian and now I think I’m ready to take things to the next level.

The trailer for Growing Out along with Andrew’s other work can be viewed here: