TANGO UNDERPANTS PTY LTD is delighted to announce that its award-winning short film Tango Underpants will screen on SBS Television next month, before heading to the Toronto International Short Film Festival for its Canadian premiere.
The film will air on SBS2 as part of its Showing on SBS line-up on Saturday 8 November, with a repeat screening on SBS One on Monday 10 November.  It has also been sold for broadcast to Pacific Voice in Japan and KQED in San Francisco, USA.
A playful and engrossing short film, Tango Underpants was written by legendary screenwriter John Collee (HAPPY FEET, MASTER AND COMMANDER) and stars Emma Booth (PARKER, CLUBLAND, Underbelly: Golden Mile).  It was co-directed by Perth siblings Miranda Edmonds and Khrob Edmonds, photographed by award-winning cinematographer Denson Baker ACS (ORANGES AND SUNSHINE, THE BLACK BALLOON), and produced by Feisty Dame Productions’ Tania Chambers and Impian Films’ Stephen Van Mil.
Tango Underpants has had an exciting few months. The film was awarded the Jury Prize at the Heathcote Film Festival; selected as an audience favourite at the Palm Springs International ShortFest; nominated for four awards at the 26th annual WA Screen Awards; and screened on Qantas flights across Australia, the Australian Centre for the Moving Image and a Flickerfest showcase in Bali. 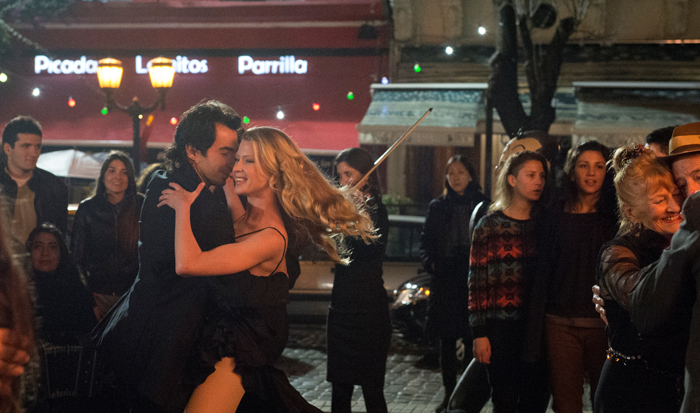 Emma Booth in a scene from Tango Underpants.

It has also screened at a number of international festivals including Cinéma des Antipodes in Saint-Tropez, San Diego International Film Festival, Rhode Island International Film Festival, CinefestOz Film Festival, Indie Gems Film Festival, WOW Film Festival, St Kilda Film Festival, Perth International Arts Festival, and Flickerfest International Short Film Festival. Following its world premiere on the opening night of Flickerfest, Tango Underpants was invited to tour nationally with the prestigious festival.
According to the producing team, the SBS deal has been ‘the icing on the cake’.
“It is so wonderful to have Tango Underpants showcased via SBS. The channel is renowned for bringing the best stories from around the world to our Australian audiences,” said Tania Chambers.
Stephen Van Mil agreed saying: “it’s very exciting to have an Australian short film showcasing Argentina and the art of tango, on an Australian network that is dedicated to multi-national audiences. Thank you SBS!”
“Having grown up watching the great programming on SBS, it’s thrilling to be a part of actually creating that content,” said Khrob Edmonds.
Tango Underpants tells the story of Carolyn (Emma Booth) – a young Australian backpacker who, after a bad breakup and too long on the road, has completely lost her mojo. However, all of that changes when she reaches South America. Here she discovers not only the wonders of the Tango dance and the people, but also the vital importance of the right underwear.
PRESS RELEASE